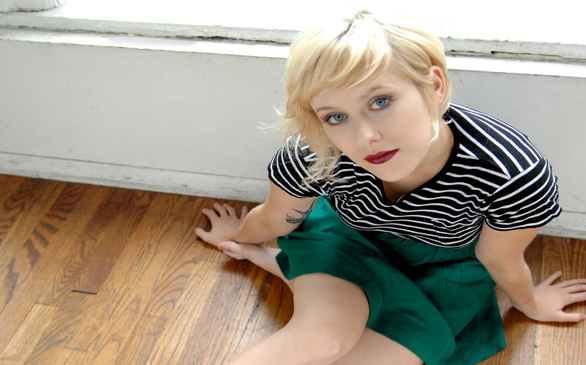 In a world where young adult icons are caught up in a whirlwind of drug rehab, salvia mishaps and nude photo scandals, it is a relief to hear how grounded Katie Costello is. She is dedicated to creating quality music. She isn’t caught up in the hype of auto-tune, an overpowering bass or trying to guise a lack of talent with over-the-top sex appeal. Instead, she understands music from a human perspective and believes that, “records should change people’s lives.” (Some of her life-changing albums include Fiona Apple’s Tidal and the Beatles’ White Album.) This very mature insight is coming from a girl who grew up not knowing anything about music; a girl who is actually the first musician in her family.

“I don’t think I’m a natural musician. I didn’t grow up being exposed to music. I’ve always been a natural writer. When I found music, it gave me the best platform to write the things I wanted to write,” says Costello.

Costello actually had no idea she wanted to sing until she was 13, when a friend begged her to go to a performing arts camp and dance. Knowing there was no way she could ever be a dancer, Costello tried singing and began taking singing lessons soon after. She then began learning to play the piano because “I wanted to practice songs we were learning by myself. I enjoy being independent, and even at that age, I wanted to be self-sufficient. I started writing immediately after that.”

As a result, she became very disciplined, making sure to constantly practice the piano, which means she “writes a song nearly everyday.” She dropped out of high school at 17 and moved to New York so she could write and play music full time.

“I ended up finishing high school online, which is about the creepiest thing anyone could do,” jokes Costello.

At 18, she caught her big break when she won Sennheiser’s first songwriting competition, and six months later she released her first album, Kaleidoscope Machine. Now that Costello is releasing her second full-length album, Lamplight (following last year’s EP release The City in Me), she has become more accustomed to the hustle and bustle of the music business. Her songs have been featured in shows like “Private Practice,” “One Tree Hill” and “90210,” and she performed at NAMM on the John Lennon Educational Tour Bus stage. Any other young adult might find the increasing momentum of success overwhelming, but Costello guides all those negative emotions straight into her music.

Lamplight is filled with vocal harmonies that create an eclectic sense of time and instruments that keep true to their oaky sound. It’s bluesy, it’s honest, it’s playful and fresh. It doesn’t stray too far from her first album, but we are able to get to know her better and watch her grow as a writer. Songwriting is her therapy, and Lamplight is an album that communicates her very private emotions about loneliness in a strange city, her attempts at finding herself and her struggle with feeling inadequate.

“There were definitely times when I didn’t feel good enough. Listen to ‘Ashes Ashes.’ That’s what that song’s about. But I didn’t want that feeling to limit myself. I took that feeling and used it to challenge myself.”

Costello is not afraid to be open and vulnerable with people who listen to her music. It’s the best way anyone can get to know her.

What is so refreshing about talking to Costello is how enthusiastic and self-assured she is and how determined she is to never take any negative thought too seriously. She’s someone who had a dream and is thankful for every moment she’s living it.

“I get to play my music live and travel around and have music be my priority, which was the goal, which was my dream,” shares Costello.

She still hopes to continue her education one day, stating, “I actually love school. It was really heartbreaking to leave school and pursue music.”

Does that mean she’ll be studying music in the future?

“I don’t like music in an educational environment. It just takes the creativity and fun out of it.”