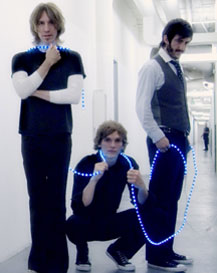 Although the band’s name sounds like it would belong to some kind of demonic feline, Silverlake’s Sabrosa Purr isn’t evil at all. In fact, Will, Jeff and Jacob are some pretty cool cats who haven’t become jaded by L.A.’s notorious and seemingly self-important music scene.

The music of Sabrosa Purr is loaded with the kind of passion that only a musician whose heart is in exactly the right place can exude. Tossing aside convention, Sabrosa’s members take an approach to songwriting that doesn’t make use of traditional structures like choruses or familiar coda formats. Instead, creating what sounds like the atmosphere of Jupiter washing over you in waves big enough to surf on, the members of Sabrosa Purr wouldn’t be content to make just another album to sit on music store shelves.

"I don’t want to make any old records," says guitarist and singer Will Love. "I want to make really amazing records and push the entire band to the top of what we’re able to do. [To] really create something different."

Love has plenty of zeal when it comes to the band’s creativity. So much in fact, that not even his bad luck with housing (he once had to give up his apartment and live in the studio because he couldn’t afford both) could force him to shift his focus. This "trimming of the fat" had a profound effect on Sabrosa Purr’s musical path.

"It makes everything more focused – [the music] had a very real sense of desperation," Love recalls. "I knew I had to make something happen if I was going to give up my apartment… I highly recommend it to anyone that’s crazy enough to do it."

Living in a studio and showering at the gym may sound crazy, but the payoff seems to be building for the band.

"Everything’s going great, we’ve got ourselves a management deal and we’re doing an EP which will come out in a couple of months," says an excited Love. "Just the way my bandmates interpret the songs that I write; it’s just a really great, creative collective."

Love is talking about guitarist Jeff Mendel and drummer Jacob Thompson, the other two-thirds of the band who, according to him, are the culmination of many lineup changes.

"In the last couple of years, a lot of people have been in this band and it certainly wasn’t always as good as it is now." The "good" Will’s speaking of is the one-mindedness that he says consumes Sabrosa Purr when they play.

But where does it all come from? What’s their source of inspiration? Will says it’s always something different, but the catalyst is usually aurally-oriented.

"It always seems to be a sound that sort of catches me… a little riff, vocal idea or drumbeat. The song kind of unfolds from [that]."

What’s sure to unfold for Sabrosa Purr is success. In fact, the possibility of failure is nonexistent to Love who proclaims that, no matter what, he’ll always be making music, even if it means giving up the apartment again – an attitude sure to carry him and the rest of Sabrosa Purr far.

Sabrosa Purr will perform with Devics on July 18 at Tangier in Los Feliz, on July 25 at The Echo in Echo Park and on Aug. 19 at Silverlake Lounge in Silverlake. For more information, visit www.myspace.com/sabrosapurr.