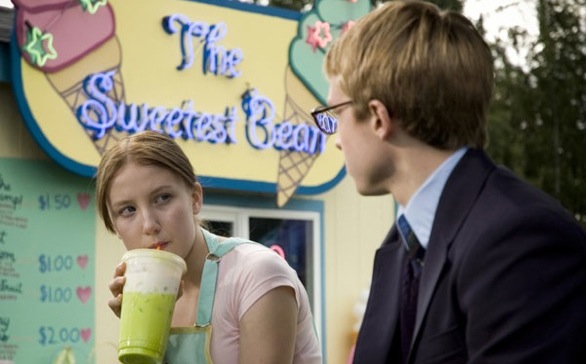 Vanessa (Savanah Wiltfong) and Philip (Shayne Topp) in Dear Lemon Lima
(Credit: Phase 4 Films )
With a mother who behaves more like a little sister and an arrogant boy from class who won’t give her the time of the day, life gets a little complicated for Vanessa in Dear Lemon Lima.

At 13, Vanessa Lemor (Savanah Wiltfong) faces the hardships of prep school, heartbreak, trying her best not to “fit in” and even death.

Alaskan native Wiltfong is charming as the youthful, spirited Vanessa. Shayne Topp, who plays her crush Philip Georgey, acts well beyond his years, and he does it flawlessly. He’s 13 going on 45, and it is hilarious.

In the vein of Juno and Napoleon Dynamite, the film has the heart of both powered by an offbeat Alaskan spirit. Writer-director Suzi Yoonessi brings to life a beautiful and fun comedy. Director of photography Sarah Levy proves genius as she paints a world filled with candy hearts and awkward teenage humor, and composer Sasha Gordon adds a bright, magical, jubilant score.