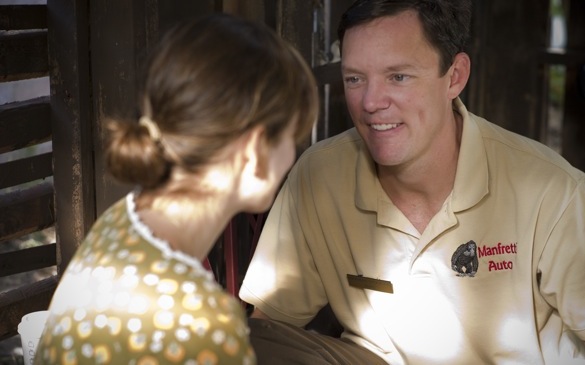 Man-child. This is what Herman Spooner (Matthew Lillard) is in the movie Spooner. A man who is on the brink of turning 30, and simultaneously on the verge of being kicked out from his house by his parents, Spooner is still a naïve child at heart. Do you remember that kid on the block who tries to be cool? Well, that is what Herman Spooner is all about; he is equivalent to a 12-year-old trapped in a man’s body, trying to be cool. Spooner is a cute (Yes, it’s just cute in an awkward way.) movie about a man who is in desperate denial of learning how to “fly.”

Herman Spooner is the average guy who still lives with his parents, who also happen to be his best friends. He gets pushed around by his boss at a used auto dealer, doesn’t seem to have any friends or act like he’s ever had any girlfriends before. He is the ultimate socially awkward loser until he meets the girl of his dreams, Rose (Nora Zehetner), whom he “rescues” when she is stuck on the side of the road with car trouble.

Spooner, clearly never having properly courted a girl before, only manages to start an awkward conversation with her as he takes her to his auto dealer to get her car fixed. Later that night, they meet again ¬– thanks to Spooner’s sort of creepy efforts. The two connect, drink, talk and jump up and down on a bed. Spooner falls for Rose immediately but is devastated when she tells him that she will be leaving for the Philippines the day after tomorrow. How will he stop her from going? This movie chronicles the growth of Spooner, a chick in a nest learning how to fly.

I was so annoyed by Spooner throughout the movie that I was practically yelling at the screen (Dumb, I know, but that’s what Lillard’s impeccable acting does to you.) for him to take some kind of action with Rose, and then I was frustrated at his childish and selfish efforts to convey his feelings for her. But then again, you will be amazed at his tremendous personal growth by the end of the film. Spooner is a truly a cute movie.


Spooner releases in select theaters March 4.
Article posted on 3/4/2011
This article has been viewed 2008 times.