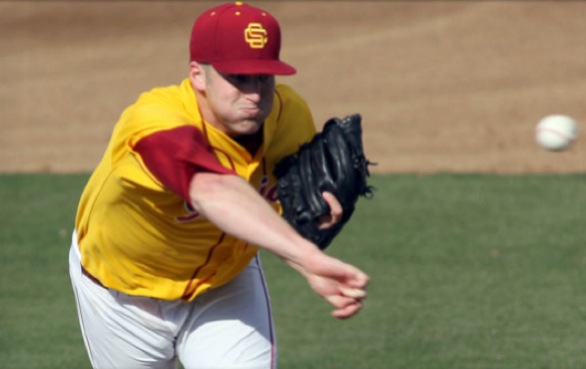 The Trojans fell to Cal State Fullerton in the three-game series over the weekend.
(Credit: Jeff Golden/usctrojans.com)

Both UCLA and USC baseball faced above par competition last week in their respective contests. Here is the roundup.

USC: Even with competitive hearts, the USC Trojans could not see the win column in their four games last week. A trip to Long Beach saw the Trojans lose 5-4 to the Dirtbags March 1 before two defeats at No. 7-ranked Cal State Fullerton by scores of 10-1 and 7-3 on Friday and Saturday, respectively.

The Trojans’ closest opportunity came in the series finale, which was played at home in Dedeaux Field March 6. Fullerton, however, had other plans in mind as they swept the host in a 2-1 result. Pitcher Logan Odom threw an exceptional 7.2 innings in the losing experience.

Before entering the Dodgertown Classic over the weekend against St. Mary’s, Georgia and UCLA, respectively, the Trojans (3-8) travel to Santa Barbara on Tuesday, March 8, to face the Gauchos at 2 p.m.

UCLA: Now ranked No. 5 in the nation, the UCLA Bruins began the week with a comfortable 5-2 win at San Diego State March 1. UCLA utilized four different pitchers, but Zack Weiss earned his first collegiate victory after tossing 3.1 innings. Beau Amaral’s three-for-five with one RBI and Steve Rodriguez’s two-for-four, two-RBI day led the way offensively. The Bruins grabbed 10 hits, but the pitching was key since they allowed just three hits and two runs.

UCLA grabbed its second consecutive road win in as many games in the first series game against Nebraska by a score of 1-0 in 11 innings. Gerrit Cole went the nine innings, surrendering two hits, two walks and striking out eight in the no-decision effort. Dean Espy drove in the winning run in the top of the 11th, as his single scored Tyler Rahmatulla.

Thereafter in the series’ final two games, the Bruins took the Cornhuskers to extra innings in each affair. With 2-1 (12 innings) and 5-4 (11 innings) scores, Nebraska outlasted UCLA. The Bruins, who are now 7-4, are scheduled for the Dodgertown Classic at Dodger Stadium this coming weekend. They face Georgia (Friday), St. Mary’s (Saturday) and USC (Sunday).