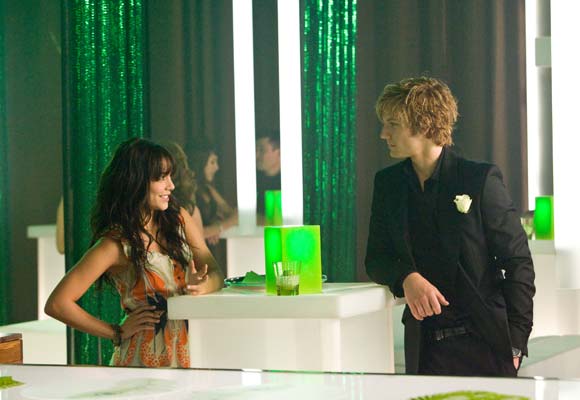 Beastly, a modern twist on Beauty and the Beast, stars emerging heartthrob and the possible second coming of Robert Pattinson, Alex Pettyfer, as a man who’s young, wealthy, beautiful and cruel. When he chooses to pick on the wrong classmate, a teenage witch played by Mary-Kate Olsen, he’s placed under a powerful spell that turns him into everything he despises. Ugly, scarred and alone, he’s given one year to find someone to love him as he is in order to break the curse or live the rest of his life disfigured … or as uglied up as someone as handsome as Pettyfer can be. Enter Neil Patrick Harris as a blind tutor teaching him how to see inner beauty and High School Musical star Vanessa Hudgens as his one chance at redemption.

Beastly was scheduled to hit theaters in the summer of 2010 and has been bouncing around the calendar ever since. Whenever you see a studio playing that game of musical chairs with a movie’s release date, it tends to raise some red flags. Finally making its way to theaters, it appears the studio is trying to capitalize on the heat Pettyfer is generating with his other major debut, I Am Number Four, and the increasing buzz surrounding his rising star.

At the press day for the film at the ultra-sleek SLS Hotel, Pettyfer, speaking in the British accent he concealed for the film, and Hudgens, in a wide-leg white Topshop jumpsuit and Badgley Mischka accessories, settle in to discuss what it took to transform the handsome young actor into something resembling a beast.

“I’m glad there was no fur involved,” Pettyfer begins with a smile. “Wasn’t so glad that it took me five and a half hours in makeup. I think I had this image in my head and thought it would take 30 seconds. Not the case, not the case. But I’m very proud of how it turned out.”

“It was really cool and crazy,” Hudgens adds. “The first time I saw [him in makeup], I was flabbergasted. It literally sucked the words right out of me, and he was just looking at me, he wouldn’t even say anything. He totally transformed into another character; it was a clean slate. It was like I didn’t even know him as him.”

Someone else audiences might not feel as if they know is Olsen. Often people forget how talented she is because of her child-acting past and constant tabloid attention, but, as Pettyfer points out, she’s had recent strong turns in The Wackness, as well as Factory Girl, and brings real gravitas to her short time on screen in Beastly.

Hudgens reveals that working with Olsen was “so much fun! She is not only extremely talented, she took me shopping, which I was thrilled about.”

As would any fashionista! So what is a Mary-Kate Olsen shopping trip like?

“We went around to a bunch of vintage shops and picked some fun, random things out,” Hudgens grins. “She’s a cool girl, who’s really smart. I adore her!”

“I wasn’t fortunate enough to go shopping with her,” Pettyfer interjects. “I didn’t have that privilege. But she’s amazing. She’s a great girl and a great character.”

The young actors also had the chance to work with Harris, perhaps the funniest man currently on television, which proved a sticking point when it came to shooting non-comedic scenes with Pettyfer.

“He’s very funny, and it’s hard [not to laugh] because he cracks up himself,” Pettyfer explains. “I needed to see him not make himself laugh, so we had a bonding session and went and saw Bruno. Very funny, sitting next to Neil Patrick Harris watching Bruno, let’s just put it that way, very, very funny.”

Over the course of filming, the young actors say they learned lessons they brought to their next projects, in Pettyfer’s case, Now with Justin Timberlake, and in Hudgens, Sucker Punch – “Out of high school and into a bra!” she cheers.

“Patience and teamwork,” is what Pettyfer took away from the film, while Hudgens says, “I feel like with each movie you get better. Practice makes perfect. There’s no better acting class than actually being in front of the camera. It was an awesome opportunity for growth.”