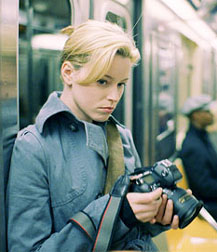 Unraveling like a breezy mystery novel, Chris Terrio’s delightful Heights pokes its nose into the lives of a quartet of interconnected Manhattanites who – over a 24-hour period – try to resolve their unsteady romantic relationships.

... Jonathan (James Marsden), a temperamental lawyer and former model with issues that link him with

... Alec (Jesse Bradford), a struggling actor facing a career breakthrough after a successful audition for an Off-Broadway play being directed by

... Diana (Glenn Close), a legendary actress whose jealousy over her husband’s affair with her understudy compels her to try to abort the marriage of her daughter

Meanwhile, Diana’s supposedly open marriage is a sham. She aggressively dallies with whatever straight men she finds around the theater, but it’s a defensive reaction to her husband’s philandering, not a compelling need.

The catalyst in the story is Benjamin Stone, a bisexual photographer who is never seen but whose coming exhibit in a Manhattan gallery will greatly affect the lives of our four characters.

Close is amazing in her depiction of a would-be acting coach who cannot tell her teaching philosophy from her internal pain. Diana is a Method actress building emotional memories as she goes. She’s a lie in progress, and Close turns us into frustrated, passive observers.

Despite efforts to "open" the film up with street scenes and trips to the theater, Heights is stage-bound throughout, and the secrets it would like to keep are very predictable.

But its heart is in the right place, and the performances are first-rate.

Heights is currently in theaters.
Article posted on 7/8/2005
This article has been viewed 1350 times.