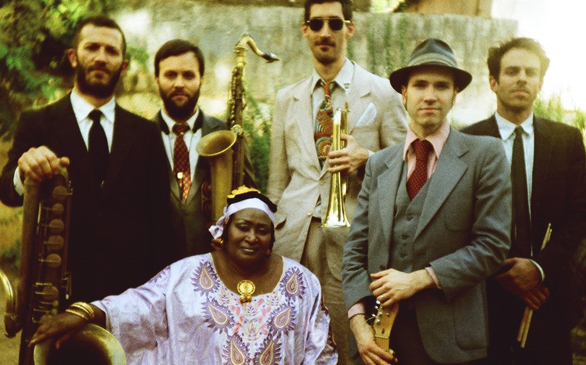 The Sway Machinery has a unique sound that’s informed by ancient Jewish Cantorial music, a sound that the Brooklyn collective – featuring members of Antibalas, Colin Stetson of Arcade Fire and Jeremiah Lockwood of Balkan Beat Box – often have sounding like reggae or ska by the time they’re done bringing it into the 21st century. Already respected as one of the most innovative bands dealing in world music, the Sway Machinery has not only raised the bar with the release of The House of Friendly Ghosts Vol. 1 but knocked it right out of sight.

After playing at the Festival in the Desert in the North African country of Mali, the guys have fully incorporated that region’s Tuareg music into their exotic amalgam with the result that songs like “Skin to Skin” sound like something that could only be hoped for if David Bowie teamed up with George Clinton and a bunch of local players in Timbuktu. About half the album is in this vein with vocals performed at least partially in English, while the other half is pure Tuareg featuring Malian singer Khaira Arby. Even the brief field recordings inserted between songs are quite entertaining; this is probably the first time you’ve ever heard camels snorting on a popular recording.

Malian music is the hottest sound coming out of Africa right now, but the Sway Machinery has done far more here than hop on a bandwagon. This effort will be difficult to top, but the fact that “Vol. 1” is appended to the album’s title hints that there might be more in this style yet to come.

The House of Friendly Ghosts Vol. 1 is currently available.