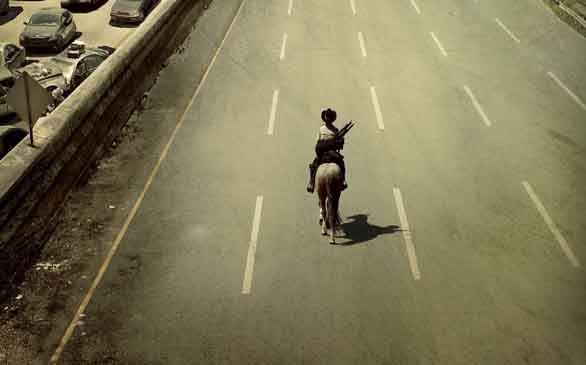 The Idiotbox: TV’s breakout hit of the year, The Walking Dead: Season One arrives. Frank Darabont (The Shawshank Redemption) helped bring to the small screen Robert Kirkman’s long-running comic series to great effect. Set in a post-zombie apocalypse wasteland, the show follows a small-town sheriff as he leads a group of survivors against the growing zombie armies.

Mystery Science Theater 3000: Vol. XX features four offerings from original host Joel Hodgson, including Project Moonbase, Master Ninja I and II and The Magic Voyage of Sinbad. Included is an interview with Master Ninja guest star Bill McKinney, a featurette exploring the look of the show and a limited edition stress ball.

Funny Business: British satirist Chris Morris (“The Day Today”) skewers jihadists in Four Lions. Four would-be terrorists living in England plan the ultimate martyrdom. The only thing standing in the way is their own stupidity and delusions of grandeur.

Rachel McAdams is a TV producer brought on to save a disastrous morning show while reigning in its egotistical new host (Harrison Ford) in Morning Glory. Diane Keaton and Patrick Wilson co-star.

Johnny Knoxville and his gang of hooligans return for another assault on their genitals in Jackass 3.

Foreign Fare: One of Quentin Tarantino’s inspirations for Pulp Fiction, Fernando Di Leo was to gangster films as Sergio Leone was to westerns. Big, bold and violent, the films in Fernando Di Leo Crime Collection (available March 15) are a revelation. Included are: Caliber 9, The Italian Collection, The Boss and Rulers of the City.

One of Federico Fellini’s later gems, The Clowns is a kind of surrealist documentary, a tribute to one of Fellini’s lifelong loves, an institution that pervaded all of his work, the circus.

Action! Paul Haggis (Crash) wrote and directed the thriller The Next Three Days starring Russell Crowe and Elizabeth Banks. When his wife is wrongly accused of murder, Crowe has only three days to clear her name before she is sent to prison for life. Liam Neeson co-stars.

The Man From Nowhere is South Korean director Jeong-beom Lee’s explosive crime thriller. An ex-con is dragged back into the drug trade in order to save the life of a little girl only to become embroiled in a gang war.

Stranger Than Fiction: Narrated by Matt Damon, Oscar-winning documentary Inside Job goes behind the real story of the financial meltdown, an in depth look at a criminally unregulated financial industry.

Teachers and students can learn how to further apply the vital lessons contained within the film through an online study guide (insidejobstudyguide.com) created with the help of University of San Diego's professor of Law and Finance, Frank Partnoy.

Before he was a bland action star, Nicolas Cage gave a string of idiosyncratic performances. Moonstruck, a quirky and original romantic comedy, cast him as an unlikely romantic lead alongside Cher in her Oscar-winning performance as a woman set to marry a man she doesn’t love (Danny Aiello) only to fall for his younger brother.

Few movies reach the iconic status attained by Rain Man. Barry Levinson directs the story of a self-centered man (Tom Cruise) left out of his father’s will who takes his idiot savant brother (Dustin Hoffman) on a road trip in an attempt to get the inheritance.