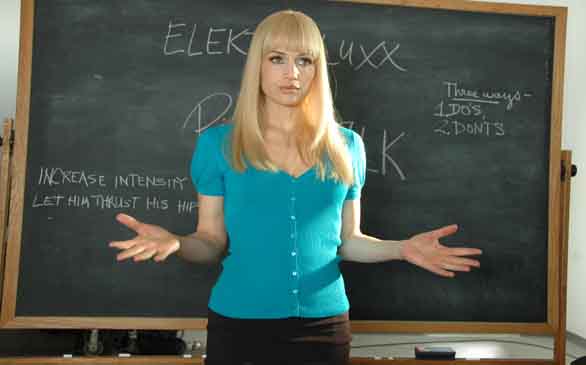 In a film featuring multiple women with various complex issues written so true to life, it’s hard to believe their inner feelings were intricately crafted by, oddly enough, a male. Writer-director Sebastian Gutierrez explores not only the deepest emotions and thoughts of females, but specifically those of an adult entertainer in Elektra Luxx, the second in a trilogy by Gutierrez – following the prequel Women in Trouble and preceding the final installment, Women in Ecstasy.

The film follows ex-porn star Elektra Luxx as she reinvents herself as a sex-education instructor. The script lends itself to her humanity, rather than focusing on the negative connotations adult entertainment often carries.

The females in the cast, including Gugino, Malin Akerman and Emmanuelle Chriqui, agree that Gutierrez can easily relate to his women. Gutierrez claims he doesn’t find it necessarily more challenging than writing for a male role.

Gugino describes Gutierrez as "having a great love for women and a great skill for writing. So thankfully we’ve lucked out and gotten to be a part of it.”

“I don’t [claim] to be any connoisseur on women and their thoughts. They’re all crazy in the best way,” says Gutierrez. “Their emotions are so much more accessible than men. A woman can do anything. [They] can be really serious right now and break down crying in about 30 seconds and then get threatened and then grab a gun and shoot me.”

“If it was Sylvester Stallone, I’d have to explain why he cried; he’s sensitive and he’s not wimpy, but he’s not gay,” Gutierrez adds.

The film, which was shot in 15 days, does not fall into one specific genre.

“If you’re writing for a movie as a producer to make a lot of money, you write a genre, a horror thing that has two sequels and it has something that everybody can understand,” starts Gutierrez. “Hollywood has to make a roller coaster ride where everybody’s on the same ride. I hate that. I don’t like roller coasters.”

“These movies are so character driven both by design and necessity of budget. Some people don’t get it at all. I’m interested in this melodrama where the emotions are real but the comedy is over the top and both can coexist in this. And then you’re talking about sex. So it’s a combination where a lot of people don’t know where to stand,” states Gutierrez.