March of the Penguins: (Warner Independent) 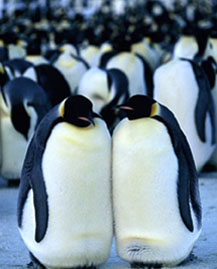 Humans are genetically programmed with a weakness for cute things – that’s why we coo over the endearingly round features of babies, even when they’re screaming their heads off. And that’s why you’d have to be inhuman not to adore March of the Penguins, a nature documentary about emperor penguins raising families against all odds in the frozen Antarctic.

The filmmakers tracked down a huge, chummy colony of emperor penguins – magisterial, plump, gorgeous, black-and-white birds with a hint of racing-stripe orange on their faces and a waddle that is at once purposeful and comical.

And that’s just the parents! Their fuzzy, inquisitive offspring rank among the cutest creatures to be found anywhere, let alone hatching out of eggs that have been balanced on their weary father’s feet for months while mom’s out doing the grocery shopping.

If the emperor penguins didn’t live in the Antarctic, we’d all be adopting them. Instead, in some strange twist of Darwinian weirdness, these magnificent, heart-melting creatures have chosen to live, love, mate, reproduce and stand around in icy blizzards in some of the world’s harshest terrain.

French filmmaker Luc Jacquet and his crew collected astonishing footage and, after a dismal experiment with creating "voices" for the penguins on the soundtrack, went with Morgan Freeman’s welcome narration.

Although science advises against this – and for very good reasons – it’s hard not to overlay human emotions and motives on the birds when they act so ... human. They choose a mate from among a milling crowd like Tony seeing Maria across the dance floor in "West Side Story." The new couple stands together with beaks entwined, seemingly enchanted, heedless of the risks that lie ahead (and the movie doesn’t spare us some of that heartache).

The ones who fail at parenthood seem desolate; the ones who succeed seem thrilled, stealing prideful peeks at their chicks.

March of the Penguins is a totally family-friendly movie. It will make you want to bill and coo with your mate, cuddle your young and maybe even go for a swim.

March of the Penguins is currently in theaters.
Article posted on 7/8/2005
This article has been viewed 1357 times.