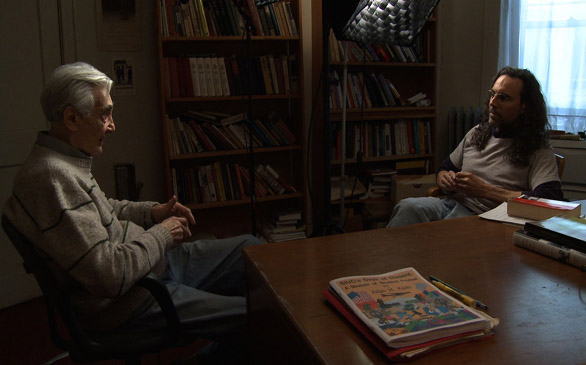 Directed by Tom Shadyac (Ace Ventura, Bruce Almighty and Liar Liar), I Am is a whole new type of documentary. It is the kind of documentary that doesn’t involve bad graphics or a horrible soundtrack. The movie begins with the director’s personal story of how he became interested in the “human connection”. A biking accident causing a broken arm, concussion and post-concussion syndrome (a condition where the symptoms of the concussion do not go away), leads Shadyac to the curious question: How do we improve the world – if we can?

The movie follows Shadyac on numerous interviews with a wide variety of individuals, each adding a small part to the larger answer. The first issue that Shadyac delves into involves the seemingly inherent greed for material items that humans seem to possess, as well as the lie we’ve been told that “items equal happiness” – a lie that Shadyac himself faced and learned from. This is just one of the many compelling facts, alongside heartwarming moments, in this documentary pertaining to the human condition.

There are so many new ideas and facts thrown into this film, it left my head spinning. We were lied to about Darwin’s favorite phrase? (Hint: It wasn’t mentioned more than three times in The Descent of Man.) Even for the most cynical of documentary watchers, give I Am a chance. You will want to go out and change the world, even if it’s just to give a hug to a stranger.

I Am releases in select theaters March 11.