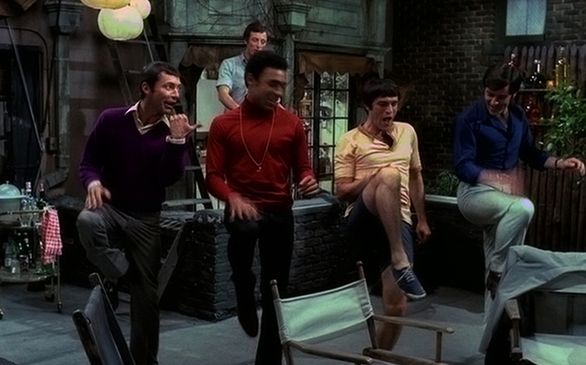 The Boys in the Band perform the Hully Gully.

LGBT. Stonewall. Gay parades. Police raiding bars. What do these things have in common? Each year in the United States, there is a National Gay Pride Day celebrating the love for being gay (or love for gay people). While many of you may be aware of this, you probably don’t know the history behind it or the history of those who participate in it. Maybe it’s time you started wondering: What was it like to be gay in the mid-20th century? Today, it’s not so surprising to see a gay person walk down the street, but the length of time it took for gays to freely strut the streets without being beaten to death, or at least escaping unscathed by brutal mockery, was horrendously long.

Making the Boys is a documentary-style film, executive produced by Bill Condon and directed by Crayton Robey, illustrating the history of gay people in America, focusing on a revolutionary play (later turned into a film) by Mart Crowley. This play, titled “The Boys in the Band,” sparked the controversial war for which gays have fought for four long decades … a “war” that is still going on today as gays fight for equality in society. The Hollywood film version of the play was released in 1970, causing much buzz; it was something people had never seen before. Before the film, gays were never accurately portrayed; they were cornered into roles as vicious villains or victims of gory crime.

Artistic and entertaining in its storytelling, Making the Boys delves into the history of gay people, their part and representation in society as well as the making and success of the play and Hollywood remix before, during and after their releases. This film is truly educational, its purpose clear and concise, and its cinematography noteworthy.