DeVotchKa: A “Collaboration of a Larger Art Form” 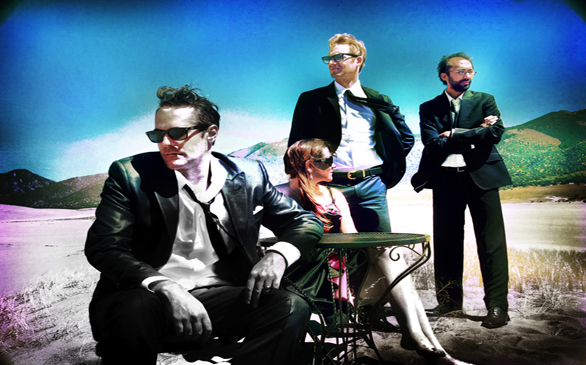 A large projection screen shines a light and a movie starts to crackle and roll in the mind of Nick Urata, the singer-songwriter behind the elevated music of DeVotchKa. It is that movie to which Urata must score the soundtrack, creating an orchestral tour de force of emotion and imagery.

With DeVotchKa’s fusion of Slavic, Romanian, Latin, minstrel and mariachi styles, you almost feel like the band comes from a classic old-world country. Stemming from Denver, Colo., they’re influenced by each style’s striking appeal.

“We always gravitated towards those musicians because they’re so powerful. You can hear a mariachi or gypsy band three blocks away with no microphones. They’ll play for hours and hours on end with no amplification, and it’s a very powerful thing,” says Urata.

Their sound is like no other; some may say it’s an acquired taste, to others a grand masterpiece.

“We tried to fill in the gaps with the music I wasn’t hearing at the time with the music we were writing. So I went on a search for similar-minded players and through various twist and turns this is how we ended it up,” explains Urata. “It’s hard to pinpoint one thing. I try to create music that I would want to listen to, and I wasn’t finding it anywhere.”

Urata started writing music in 1997, and the band has stayed together since their conception in 2000. Playing the trumpet since he was three, Urata is the lead vocalist and has a penchant for musical instruments, playing the theremin, guitar and various other keyboards and percussion. DeVotchKa’s other members – Tom Hagermen, Jeanie Schroder and Shawn King – add elements of the violin, accordion and sousaphone.

DeVotchKa, which is the Russian term for “girl,” is a name that, according to Urata, inspired something that is “beautiful, sexy and feminine.” The band accredits its style from playing burlesque shows during their early years, playing the background music for Dita Von Teese.

“It was a dream gig for a young musician; it was great for us because we didn’t know what musical direction we wanted to go in. It kind of fostered a path of playing different types of styles because the show required us to change gears for every act,” says Urata. “The great thing about the modern burlesque show is that they incorporate different styles of music. They do the normal traditional va-va-voom kind of thing, and other times they let us play the Latin-flavored disco song.”

As the band grew in popularity, especially from their 2004 hit “How It Ends,” Hollywood took notice and used the song for the movie trailer for Everything Is Illuminated. In 2006, the band was asked to score the soundtrack for Little Miss Sunshine, which was later nominated for a Grammy Award for Best Compilation Soundtrack.

As movie soundtracks go, it’s a process Urata has practiced in his head before.

“The imagery and emotion of what’s going on in the [Little Miss Sunshine] story informs the music. The theme of the little tiny van travelling through the giant desert big sky country of Arizona informed the sounds that we play, and add that to the emotional baggage, which is the love that family had for each other.”

Their newest album, 100 Lovers, starts with an overture that Urata had originally written for a short film. The opening song “The Alley” is a perfect harmony of grandiose violin crescendos and Urata’s operatic voice.

As Urata explains, making music for a film is like a “collaboration of a larger art form.”

Now on a national tour, the band is greeted by a fan base eager to get lost in DeVotchKa’s cinematic sounds.

Says Urata, “I always get a celebratory vibe, which is great because it’s always what we set out to do – give a reason for people to celebrate even if it’s only for a couple of hours on a Tuesday night. It’s always good to lose yourself in the music.”