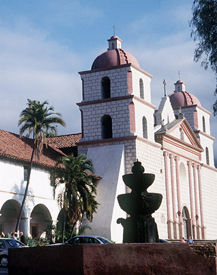 The trickiest thing about Santa Barbara is trying to find the grocery store.

"Ralphs Grocery is just over there," someone gestures.

"Over there" leads to a large white stucco building fronted by a portico of arbors dripping vines and flowers.

It takes some hapless wandering to discover that this stately Spanish renaissance-style building does indeed house paper towels and canned tuna.

The queenly coastal town of Santa Barbara heeds to a code against banality. Gas stations and fast food joints join Ralphs in hiding the shame of dealing in everyday commodities. Signs are allowed – but keep them meek. Ralphs’ tiny letters can be seen if you arch your neck.

But that’s part of the charm of this architecturally consistent town. With its red tile roofs and white stucco, it would make a fetching village for a train set. Now there’s a moneymaking scheme for Amtrak, whose popular Coast Starlight makes a stop here.

Footed by the Pacific Ocean at one end and the low Santa Ynez mountains on the other, Santa Barbara provides an idyllic setting for the appealing buildings, whose architectural uniformity came about when the town’s original plebeian buildings suffered ruination in a 1925 earthquake.

Today, red-tile roofs and spanking white exteriors set a pretty standard and turn the sky a deeper blue. Even the U.S. Post Office sets a stately standard with its California mission look.

But the Santa Barbara County Courthouse would have to be the centerpiece of any toy village. This lovely Spanish-Moorish building is set among lush palms and expansive lawns. Visitors are welcome, and docents lead tours of the 1929 building with curved indoor/outdoor staircase graced with Tunisian tiles, plus an iconic clock tower and a turret.

Even the former jailhouse is attractive, though beware the gargoyle – with open mouth, he seems to be shouting fierce commands.

On my tour of the courthouse, the docent expressed relief that the circus-like Michael Jackson trial was assigned to the courthouse up the road in Santa Maria.

"They’d trample everything," the docent noted in disdain.

Indeed. Santa Barbara is a quiet town, population 97,000, not given to splashy publicity. Locals don’t even like the fame the movie Sideways, much of it filmed in the Santa Ynez Valley, has brought.

One likes one’s quietude in a place where the median home price just reached $1 million (which still would buy you pretty small digs).

Santa Barbara’s beach location and overtures to simple elegance have lured rich and famous from all over the globe to plant second and third homes here. There’s also a base of longtime residents, who moved here long before the marketers started to push the moniker "American Riviera."

The name, which implies pretentiousness and tasteless playing around, doesn’t fit. But there’s definitely a dime or two afloat, showing up in non-ostentatious ways.

The Santa Barbara Historical Museum uses the same state-of-the-art ventilation system used in the Sistine Chapel. And the Santa Barbara Museum of Art has a stunning little collection, including three Monets.

And then there’s Ralphs, a $16 million palace for those necessary errands such as picking up cat-box filler and maybe a bit of brie.

Would it have merited a bigger sign if the name were Bon Appetit?

There are plenty of places to stay, from motels near the beach to higher-end hotels. Check www.santabarbaraca.com for options. Book early, though, because this is a popular weekend retreat for residents of Los Angeles.

? Hotel Andalucia, 31 W. Carillo St. 877-468-3515. Andalucia is a member of Leading Hotels of the World. Spacious, understated decor in its 97 comfortable rooms, and a hacienda-style lobby. It also has its own little art gallery, the Ro Snell Gallery of contemporary art, plus the excellent 31 West restaurant. Room rates start at $325 a night, though as a relatively new hotel, some promotional specials were offered this spring. Visit www.andaluciasb.com