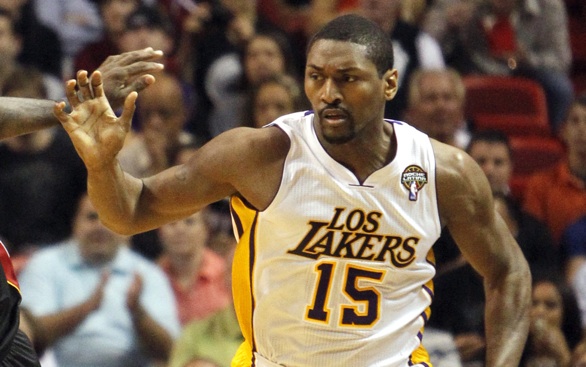 Ron Artest is a major asset for the Lakers on defense and offense.
(Credit: Charles Trainor Jr./Miami Herald/MCT)

Los Angeles had its toughest road trip yet, but they excelled after wins over the San Antonio Spurs, Atlanta Hawks and Dallas Mavericks.

Despite a losing effort against the Heat in Miami March 10, which acclaimed rapper Snoop Dogg attended, the Lakers have been extremely hot since the All-Star break. They have captured nine wins in just 10 games, and defense along with two key players have made a significant difference.

Yes, defense. The Lakers have finally instilled the physicality and concentration needed to defend well as individuals and collectively. Led by young center Andrew Bynum and veteran small forward Ron Artest, the Lakers are yet again the team to beat.

Bynum is finally healthy, in shape, maturing on the court and simply improving his basketball IQ a lot. This has propelled the Lakers to become the biggest threat in the NBA, especially since they carry guys named Kobe Bryant, Pau Gasol and Lamar Odom. On top of that, Artest is now in form defensively, offensively, but most importantly, mentally.

Contributing solid tight individual defense on opponents’ best players, Artest has solidified his skills more than ever since the All-Star break. Interestingly enough, his flourishing scoring ability is making the Lakers a team that is complex to stop.

In Saturday’s 96-91 victory over the Mavericks, Bynum posted an impressive 22 points and 15 rebounds while playing close to 40 minutes. That is talent coming from a 23-year-old plagued with past injuries. Artest added 12 points on five-of-eight shooting from the field while pulling down eight boards.

Such statistics from both Bynum and Artest could mean a three-peat for head coach Phil Jackson and the Lakers. After all, Bryant, Gasol and Odom are near automatic on any given night. “It was a statement for us. It was a big game,” Bryant says. “We talked before the game that this is a team that can beat us in the postseason. This team is a serious contender, and we approached it like that.”

Bryant, who sprained his left ankle in Dallas, and the Lakers face the Orlando Magic on Monday, March 14, before entertaining the Timberwolves (March 18) and Trail Blazers (March 20). All three games are at Staples Center with a 7:30 p.m. tipoff.