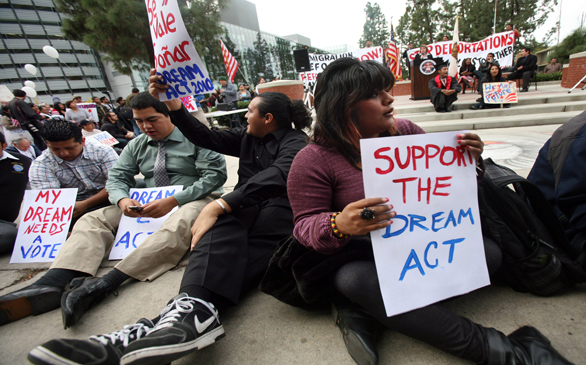 Imagine coming to California as a baby, under no fault of your own your parent crossed the border illegally. As your family establishes themselves here in America, you’re able to attend elementary school, middle school and high school, working hard and getting good grades along the way. When it comes to college, you’re suddenly blocked. Since you lived in California all of your life, you decide to attend and are accepted to a University of California school. But you can’t go.

Because you’re undocumented (i.e., have no social security card or legal paperwork), you are forced to pay out-of-state tuition after being a Californian all of your life. You do not qualify for any financial assistance and suddenly you must work twice as hard as anyone else to pay your tuition, which is at least $10,000 more than in-state tuition.

Last year, undocumented students already in college and high school students hoping to attend college were given a glimmer of hope. It came in the form of the DREAM act, legislation that would allow children of immigrants who came here illegally to be given legal status and allowed to pay in-state tuition and receive financial aid. It’s not simple “amnesty”; those wishing to apply under the DREAM act must satisfy a long and rigorous criteria process.

The criteria for legal citizenship under the DREAM act are narrowly tailored. Those wishing to obtain legal status must have: entered the country when they were under 16 years old and prove they have lived in the country for at least five years; graduated from a U.S. high school or obtained a GED; and demonstrate they have good moral character with no criminal record. Still, after completing all of these requirements, they are only given conditional legal status. There is more to be done.

This includes the next phase of the process, which is to have attended college or served in the military for two years, pass a criminal background check and again demonstrate good moral character.

The DREAM act has received support from President Obama and legislative leaders from both sides of the aisle. Former Arkansas Republican Governor Mike Huckabee stated on NPR, “When a kid comes to this country, and he’s four years old and he had no choice in it … The question is: Is he better off going to college and becoming a neurosurgeon or a banker or whatever he might become, and becoming a taxpayer, and in the process having to apply for and achieve citizenship, or should we make him pick tomatoes? I think it’s better if he goes to college and becomes a citizen.”

After the bill passed the House last December, the DREAM died in the Senate; short of the five Senate votes it needed to pass. This was the last chance for the bill to get through Congress before having to begin the process over again after the 2012 election.

Most students would be deterred by such a dire situation, but I have seen the determination and strength of undocumented students to achieve an education despite major financial setbacks. Many had to struggle working full-time while trying to juggle classes and homework. Some were forced to graduate later because they had to take time off of school to earn money for the next quarter or year’s tuition. Some have slept in their cars because they can’t afford housing. And many have utilized the free food pantry at UCLA.

As many of you may already know, I am a big advocate of students’ access to higher education, and there is something seriously wrong when talented students who can contribute great things to this country are placed in a predicament that is beyond their control. The financial burden placed on undocumented students, coupled with rising tuition fees, is a setback to the future of this country.

America was built on the back of immigrants. Young people from all backgrounds are being denied the opportunity to make a contribution to America’s future, not only monetarily through taxes, but through innovation of new ideas and skills that only higher education can cultivate.