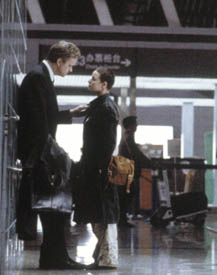 Set in the near future beneath the bright lights of Shanghai, Code 46 attempts to narrate a forbidden love affair between William (Tim Robbins) and Maria (Samantha Morton). The couple meet during William’s investigation of fake "papelles" (the future’s version of passports), and immediately William is drawn to Maria despite his knowledge of the crimes she commits. Maria and William flee to "afuera," the outside of the world’s recognized society, to continue their affair – yet after only 24 hours, it all comes crashing down.

Unfortunately, the sub-plot of the sci-fi investigation takes precedence to the love affair in Code 46, and the conundrum about the "good guy" falling in love with the "bad girl" is left as a side story for a good portion of the film. Steeped in suggested metaphor that could refer to anything from gay marriage (forbidden love), to corporate takeover (living "afuera"), to the fear of "Big Brother" (the erasure of private memories), director Michael Winterbottom and scribe Frank Cottrell Boyce (both of the Sex Pistols semi-mockumentary 24 Hour Party People) have too many agendas, making the spiraling Code 46 plot unclear and toilsome.

Still, Winterbottom’s quick cuts and dynamic camera angles, security camera quality and specific character’s point-of-view move the film through directorial vignettes that more consciously boast Winterbottom’s eye than add to the film’s overall purpose. Morton, who played the telling Agatha in Minority Report, gives another strong performance as an off-kilter sci-fi soul, but Robbins’s character is flat, leaving viewers to wonder if this was a conscious part of this strange script. The dialogue is written in a laughable polyglot language dominated by Spanglish, and the score overtly articulates the characters’ feelings to annoyance, such as when Maria repeats "I miss you" to the closing Coldplay song of the same name.