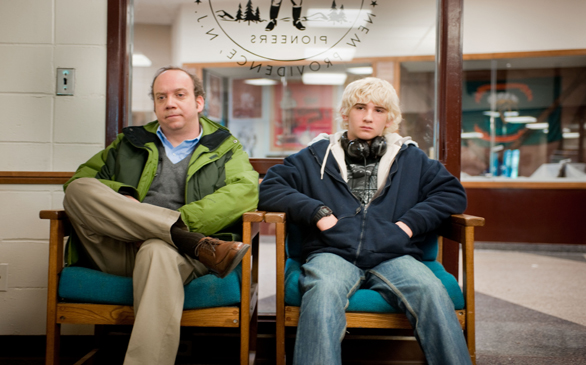 The definition of “win” has recently come under much debate and so much controversy, the media can’t get enough of it. Our grade school definition of “win” has been ostracized from the sensible American public because of its new meaning, which is overused and which has been unceremoniously introduced to our vocabulary by the already infamous Charlie Sheen. “Winning” somehow doesn’t feel so good anymore. And, likewise in this film, even a double dose of winning just isn’t what it used to be.

Win Win stars Paul Giamatti as Mike Flaherty, an attorney whose financial problems begin to maximize the stress in his life, thereby convincing his doctor to prescribe exercise, which also gives him panic attacks. He’s an average Joe living in a New Jersey suburb with his wife Jackie (Amy Ryan) and two young daughters. When his client Leo (Burt Young) is declared incapacitated with no nearby relatives, Mike takes the chance to make some easy extra money by snagging guardianship of the old-timer. Of course, it’s not that simple. Mike sends Leo to a senior home, despite the promise he made in court to help Leo live at home.

Director Tom McCarthy, whose last film The Visitor (2007) was a surprise hit, is headed for a solid career of indie favorites. He has an eye for the normal unusual, the hilariously true-to-life drama of our suburban America. Win Win is the first acting gig for Shaffer, and, though he often shies away from the spotlight, offers a meek performance that, like the film itself, gains volume and courage by the end.