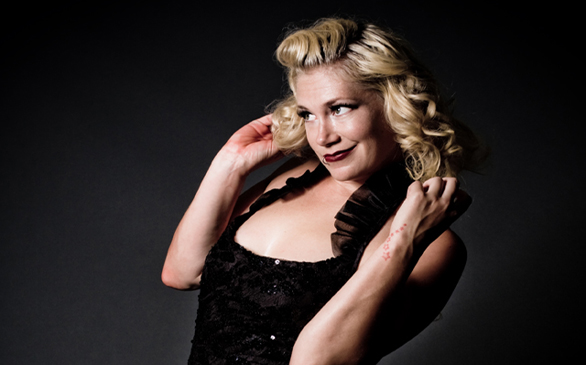 It’s time to prepare your vocal chords for some hooping and hollering as “Burlesqueland!!!,” another installment from Peepshow Menagerie, hits the stage on March 17. This past February, the creators behind the monthly Peepshow brought “The Science of Burlesque” to Bordello in downtown Los Angeles, and with much anticipation the crowd welcomed all 13 ladies, as they cheered hungry for glamour, entertainment and, most importantly, boobies.

The show opened with the scientific professor Mr. Gelson explaining the values of science and how a few lovely ladies would be demonstrating it. There were plenty of oohs and aahs as each girl captivated and educated the audience with a scientifically themed number. The show opened with Ruby Joule performing the Northern Lights in a beautifully sequined white ensemble. Next was a scantily clad Iza La Vamp making heads turn as the planet Pluto with two enormous feather fans covering her body. Other clever acts were safe sex performed by Prix De Beaute stressing over stuffed bunnies multiplying in her underwear, and Dia Blow’s quirky and informative lesson on the Sun. As the night progressed with every striptease, each girl added her own flair and charm to the show.

But what looks like a simple tease, lasting only a few minutes, actually takes a lot of hard work. To those unfamiliar with the concept of burlesque, there’s more than just stripping and baring almost all. As Dia Blow explains, there are themes, costumes and a lot of preparation for each woman that goes into the performance.

“The Peepshow basically does a different theme every month, and it’s very open to interpretation. Some girls put their music first, some come up with an idea and then find music. I run the gamut of that,” says Dia Blow.

For Dia’s number, she’d been working on the concept for well over several months.

“They Might Be Giants is one of my favorite bands, and they did a remake of a song that is part of a 1960s educational video called ‘Why Does the Sun Shine?’ I’ve had this album for years, and I started listening to it and said I have to do a burlesque routine to this,” she says.

For most ladies like Dia, this is a chance to unleash their imagination with each burlesque performance.

“You can come up with the most ridiculous ideas and figure out how to implement them … with a glue gun,” she starts. “It’s the creativity, and the shock and wow factor that comes with getting up on stage, not necessarily the sex appeal, because you don’t know what they’re going to do next. I’ve seen people do ridiculous, unexpected things, and that’ s one of my favorite parts of burlesque. One of my least favorite parts is trying to get fake eyelashes to stay on.”

Not only is this a treat for the girls on stage, but also for the producers, Chris Beyond and Scarlett Letter, who put the shows together each month.

“The Peepshow Menagerie is set apart from the other burlesque shows out there because of the storylines and creativity behind it. Chris [Beyond] puts this ridiculous amount of work into making tons of posters and promotional information getting the word out,” says Dia Blow.

They also find novelty acts, from magicians to balloon artists to bands, as openers to create a special cocktail of wonder as a warm-up before the main show begins. In February, they had the cute duo Gigi and Pop sing and play the distorted ukulele and tambourine with happy-go-lucky-go-mean-go-happy songs. Also, there was a magical act from Micah Cover who created a beautiful rose with nothing but thin air, fire and his magic wand.

In comparison to other burlesque shows, this is definitely one to check out, with provocative titles like “Naked Girls Reading” and “Monstergirls.” This group sets the bar high when it comes to putting on a burlesque show that leaves you wanting more. So the next time you’re looking to add a little spice to your evening or further your education in a saucy way, check out Peepshow Menagerie for something tantalizing.