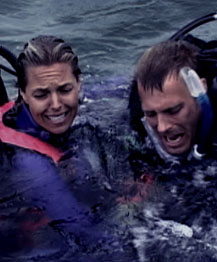 When Steven Spielberg’s open-ocean thriller Jaws first hit movie theaters in the summer of 1975, it was thought to be a technical achievement which, at the same time, managed to scare loads of people away from beach and boating outings for quite some time.

Nearly 30 years later, and minus the big bucks and special – albeit cheesy – effects of the 1970s comes Open Water, a low-budget indie shot entirely on digital video. And just like Jaws and its subsequent sequels, Open Water is sure to make some folks shy away from their pre-planned oceanic summer activities.

The film, from sophomore writer-director Chris Kentis (who also holds a cinematography credit), follows strained couple Daniel (Daniel Travis) and Susan (Blanchard Ryan) as they take a rushed, semi-enjoyable island vacation which barely fits amidst their hectic work schedules. Both certified divers, the two decide to join a tourist dive boat to explore some of the ocean’s wonderful wildlife. Everything is hunky dory until, due to a minor miscommunication on deck, the boat departs for its return trip to shore mere minutes before Daniel and Susan emerge from their underwater seafaring adventure.

At first things are loose and light as the couple holds high hopes that the boat will turn right back around when the tour leader realizes that two of its air tanks – and, ultimately, two of its divers – are missing. After countless hours pass, though, and Daniel and Susan run out of polite conversation, the dim reality of their situation truly begins to sink in. They go from worrying about peeing in their wetsuits to drifting on a current through clusters of jellyfish and shark-infested waters.

While the film starts out slowly with half of the couple’s water time revolving around corny lines and over-acted reactions, Open Water reaches its stride halfway through with some awesome shots (especially the overhead one of a drifting Susan oblivious to the handful of sharks swimming just below her) and, ultimately, a darkening sky. The tense action quickly continues to build, leading to an ending that is truly chilling (for an extra jaw-dropper, be sure to stick around for the end credits).