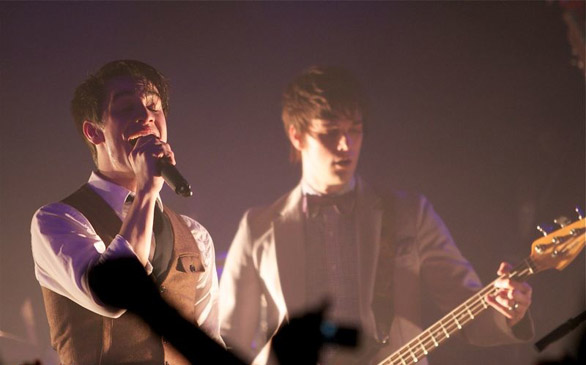 Finally, a show in Los Angeles where the fans got in – real fans. This place was going full steam from the start. A sold-out show in a historic venue with a huge band can only mean one thing: total chaos.

It’s so nice to see true fans enjoying their favorite band. That’s what it’s all about. Not a bunch of people with folded arms trying to look “cool” and not getting enthusiastic about the show. The whole point of going to a live show is to submerge yourself in the visceral experience of the event. For all the rest of the shit, there’s the Internet.

Panic! came out swinging with a very full sound. The guitars sounded excellent in the small venue. But it was the mix on the drums that pulled the show together. These seasoned musicians have played the Roxy before and know how to pull their sound together to produce the right tone that can sound amazing in that space. A lot of bigger bands think they need to go super loud everywhere they go; smart bands know how to play to the room.

Speaking of the room, this place was moving from start to finish. The screams from the fans set the tone before the band even took stage in their stripped-down show element. This time around there wasn’t the full production on stage, just four guys and a gal beating the shit out of their instruments. The female in the equation tried to hide herself off stage while handling all the strings for the night, but she couldn’t stay out of sight for long. The crowd was much smarter than that.

Overall this was one of the better shows I’ve seen at the Roxy. A very talented band came in with some superbly arranged songs and left a lasting impression. Not only was the club entertained, they left smiling and singing the songs that frontman Brendon Urie threw in their face for over 90 minutes. And for a band I never cared about too much before, after seeing them do their thing live I can now say that I’m a fan. And that is the true sign of an excellent show.