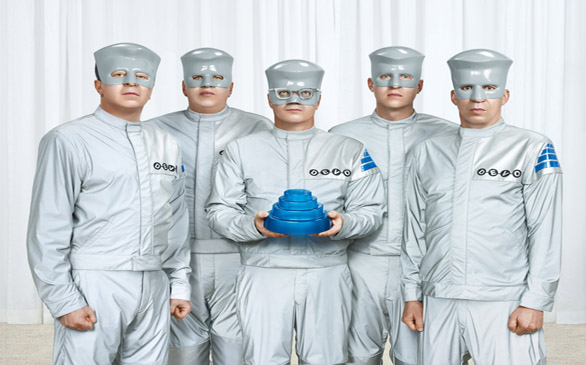 “We were objects of derision,” says Gerald Casale, thinking back on Devo’s early gigs in their hometown of Akron, Ohio. “If people paid attention to us at all, they would mock and criticize us, but that didn’t really deter me at all – it only strengthened my resolve. People would scream ‘boo’ and yell things at us, and we thought, ‘Look at who we’re pissing off? We must be doing the right thing!”

Casale lets out a laugh when talking about Devo’s pioneering days, often being the odd band out with their outrageous costumes and geeky looks, yet Devo’s music eventually dominated and distinguished a decade. Freedom of Choice, released in 1980, was the band’s breakout album, including winners such as “Girl U Want” and “Whip It,” followed by a string of successful albums and singles.

With their first album release in 20 years, Something For Everybody, Devo returns with their brand of upbeat, electro-pop songs featuring songs like “Fresh” and “Human Rocket” that fans can’t help but sing and spasmodically dance to. In addition, Josh Freese, a fiery drummer who has played with Nine Inch Nails and Guns N’ Roses, joins the lineup with Gerald and Bob Casale, and Mark and Bob Mothersbaugh.

Devo started as a joke while Casale was a college art student in the late ’60s, the name derived from the concept of de-evolution: the idea that mankind was not evolving but actually devolving or regressing as a species.

“College was a great opportunity and an eye-opening experience for me. I got to really come to terms with my world view,” reveals Casale. “I would credit my experience at Kent State with warming my aesthetic, even though it ended with students being shot by the National Guard.”

Flashback to 1970: Casale attends a peaceful protest against the U.S. invasion of Cambodia during the Vietnam War. Little did he realize he would soon be involved in the Kent State Massacre – a tragic part of U.S. history. During the protest, the Ohio National Guard opened fire on students, one being Allison Krause, a good friend of Casale’s who was shot dead as they both fled from a flurry of bullets. The anger and frustration of the Kent State Massacre eventually became a catalyst for Devo’s underlying themes.

Flash forward to today’s current events with cataclysmic world leaders such as Moammar Gadhafi and even extreme celebrities like Charlie Sheen in the United States. Can it be true that de-evolution is real?

“Devo was pro-information, pro-questioning and very against illegitimate authority,” insists Casale. “The idea that we’re all Devo, that we must repeat, and that we’re all on one level – full of shit, you know? We’re inspired by reality because the world is so ridiculous and stupid. De-evolution is real.”

Yet serious themes were often dealt with humor by a colorful cast of Devo characters such as Booji Boy, Rod Rooter, the Smart Patrol and Soo Bawlz who resided in Spudland, with an intricate storyline that played out in their groundbreaking music videos. Add red energy dome hats, yellow suits and an electrifying live show and what have you got? A visual and music extravaganza spawning a legion of loyal and, dare I say, devo-tional fans.

Although Devo continues to influence today’s music landscape as evidenced by artists such LCD Soundsystem, MGMT and the Ting Tings, Casale still enjoys sharing stories from their starving artist days in Akron, Ohio before riding the crest of their success.

“We got paid to stop playing by a guy who owned a bar,” Casale reminisces. “He said, ‘Please, just get off the stage now. I’ll give you $100.’ We thought that was one of the greatest nights of triumph we had,” says Casale with a wicked grin. “We got paid that night!”

Something For Everybody is currently available. Devo perform March 19 at Club Nokia. For more information, visit clubdevo.com.