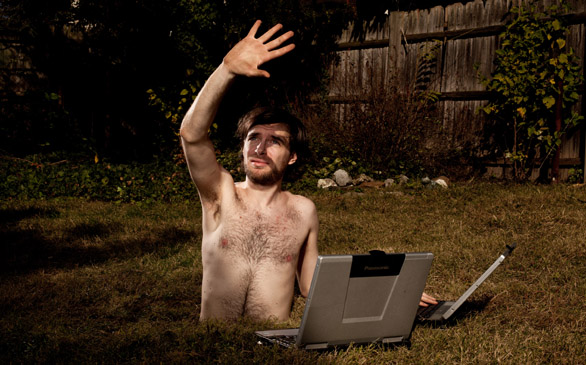 I always say that what I do is pretty much producing. I never really felt connected to the traditional DJ world in any way. The people who inspired me were producers – people like Negativland or the Bomb Squad – you know, anything like that. John Oswald, Kid606, Evolution Control Committee – those were all people who were using pop music and pop culture as their source material, but weren’t necessarily spinning records or anything like that.

How did you transform from Greg Gillis, biomedical engineer, to Girl Talk, music festival headliner?

They were definitely both happening simultaneously. I started doing Girl Talk when I was 18, and that’s basically right around the time when I started studying biomedical engineering. When I was in college, I put out two albums and toured on summer and winter breaks. I always pushed the Girl Talk thing as hard as I could, but it was something that I never really aspired to have become a career. A lot of people that I looked up to weren’t necessarily making money off of doing this.

After school, I got a job, and that was just basically because that’s where I felt my life track was. I was just doing what I was planning on doing. When my third album came along in 2006, I had been working at that job for two years, and all of a sudden I got blog coverage, and then it turned into larger Internet site coverage and it turned into magazine coverage and everything – it just kind of snowballed.

What was the process like to decide that this would be your full-time gig? Did you just wake up one day, after a show, look in the mirror and say, “I’m done being an biomedical engineer?”

I think it slowly crept up on me over the course of a year. I definitely knew it from the moment that Night Ripper started to get buzz and the shows started to sell out and I was able to start playing at colleges and clubs. I stayed at the job for another year. So I was at that job for a steady year where I was flying out on the weekend and doing shows and coming back to the cubicle Monday through Friday. Immediately when that started happening it was kind of like, “Oh, I’m making enough money on the weekend shows to sustain a life right now.” That was something that wasn’t a decision, it was just fact.

After a few months where it was continually growing, and the idea was in my mind, I took a long time to come to terms with it being a reality. Even after six months of doing shows like that, there was no doubt on paper that I was able to quit the job. But it still took another six months to actually stomach that, “Wow, what I expected of my life isn’t true anymore. I’m going to quit this job that I spent four years preparing for to do this music thing that has always been my passion, but just my hobby.”

My whole life, I’ve done music and never thought it was something that would make money at all.

You were saying that you grew up with music as your passion. But your laptop is your instrument now – that’s what you’ve perfected. Do you have any classical training in any more traditional instruments?

No. When I started really getting into music and going out seeing bands – when I was 14 – that was right around the time I really started to dive into college radio. I was interested in how far music could go, just on the experimental level. That was when I got my first taste of left-field electronic music and avant-garde electronic music.

That music is very different than what I am making now, but I definitely see a connection in terms of a similar style of figuring out how to make music with what tools are in front of you.

Your early stuff was definitely more experimental and, dare I say, more ‘noisy’. Tell me about finding what has now been defined as the ‘Girl Talk’ sound – how deliberate and directed has that evolution been?

I think it’s been a steady evolution. It’s been two years in between almost all of my albums, and I think if you listen to them in order, to me it makes a lot of sense. One leads to the other. On Secret Diaries, the first record, there are a lot of breaks in sound and a lot of experimental moments. I’d say only half the songs have steady beats.

Moving on to the second record, it’s the first time I really started to incorporate beats and really focus on the percussion and use some loops of recognizable samples. The second record is the first time I did more traditional mashup things. The third record took that idea to another extreme. I think each one was just taking ideas from the previous one and going somewhere further with it.

Even now, the last record compared to the first one, it does not sound like the same person. But I think the general idea is still the same. It’s still making pop music and trying to remix and cut it up to something new. The new music, to me, is accessible, and it’s something I’m going for. Simultaneously, I like the structure to be challenging. When you listen to that record, people can hear it and go, “Oh yeah, it’s a fun record.” But when you take a step back, it really is a 71-minute piece of music, made entirely out of samples, that’s pretty much entirely linear with very little repetition. To me, that’s exciting.

I wanted to discuss your live shows. I haven’t seen you in a little bit, and I wanted to know if you’ve incorporated lasers into your light show?

No lasers thus far, but the show has definitely grown big steps in production for this particular tour. In the past, it’s typically just been me and a couple of friends. Now, we’re traveling with a 12-person bus and a whole semi full of gear. We have a custom-built LED wall that does specific things. We have a custom-built lighting rig, and we have two people doing the actual LED content.

Everything has been ramped up a notch. The show in general is pretty action-packed. It’s more of a spectacle than it has ever been. With the sets in the past, they were a bit more freestyle.

I definitely think that people who are seeing this tour, and who have seen me multiple times in the past, are seeing something distinctly different. I definitely feel that these shows on this tour have been the most fully realized version of what I want to do, or what a Girl Talk show could be.

Your music isn’t sample-based the way someone like Kanye West’s music is sample-based. It’s more mashup music. What do you think when people question the value of mashups as a legitimate musical genre?

That’s exciting to me. I don’t mean to change anyone’s mind directly. Everyone is obviously open to their own opinion. But I feel like when you take a look back at most new forms of music, that’s what happens. When rock ’n’ roll comes around, when punk rock comes around, when rap comes around – people question the validity of it. People say it’s not music, they’re just doing this or they’re just doing that. But 10-20 years later, people aren’t saying that anymore. They’re saying it about the new thing.

I think when people are loving what you’re doing and it’s their favorite style of music, and other people hate it and say it’s not music at all, or says it’s the end of music – to me, that’s the ultimate sign that something is going right because that is what all my favorite music over the years has been.

To me, that is very exciting, and something I want to be a part of.

I feel you’ve answered that question before. Good answer.

Girl Talk performs March 19 at Fox Theater and March 21 and 26 at the Palladium. For more information, visit myspace.com.girltalk.