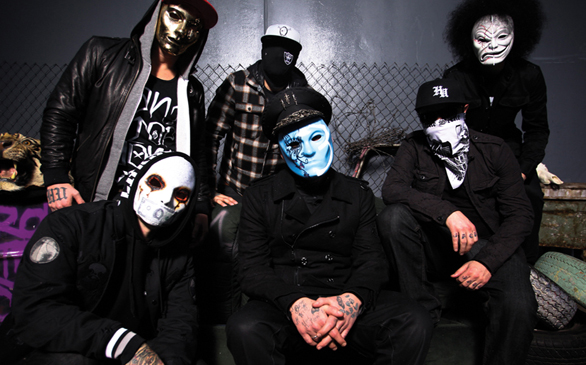 After a massively successful tour with Avenged Sevenfold, A&M/Octone recording group Hollywood Undead return to the road to headline the Revolt Tour. The mask-wearing rap-rockers also have a new album coming; American Tragedy is set to drop on April 5.

“American Tragedy is the record I always hoped that Hollywood Undead would write,” says the band’s Johnny 3 Tears. “We couldn’t be more proud. We hope all the fans love it as much as we do. Our fans mean everything to us, and we dedicate this record to them.”

The Revolt Tour rolls into the Wiltern on April 30 with 10 Years, Drive A and New Medicine in tow.

Your Next Record Contest

Continuing its support of aspiring artists, Guitar Center has announced an all-new installment of their groundbreaking unsigned artist discovery program – Guitar Center Presents Your Next Record with Travis Barker. From now through April 30, unsigned artists (including hip-hop, punk, rock and R&B genres) across the United States are invited to submit their music at yournextrecord.com. The winner takes home quite a prize: a three-song EP produced by Barker (Blink-182) who’ll also perform on one cut, $10,000 worth of gear from Guitar Center and worldwide distribution of the music through TuneCore. Fans will help determine the winner by casting votes at ourstage.com.

The nonprofit music education and social justice organization Rock ’n’ Roll Camp for Girls Los Angeles has announced a brand new experience for women 21 and over; Ladies Rock Camp takes place April 29-May 1 at Immaculate Conception School in downtown Los Angeles. The idea is to encourage self-expression and otherwise empower women through music education, specifically through learning the fundamentals of playing an instrument (guitar, bass, drums, keyboard, DJ/turntables), writing an original song and performing live at a reputable music venue. Female mentors lead all workshops including sessions on screen printing and self-defense. Cost to attend is $350 and all proceeds go toward scholarships and financial aid for underprivileged girls ages 8 to 17 hoping to attend the organization’s Rock ’n’ Roll Summer Camp. rockcampforgirlsla.org

The third annual edition of the Revolver Golden Gods Award Show takes place at Club Nokia in downtown Los Angeles on April 20. The best heavy metal and hard rock performers compete for awards in eight categories, including the Best Guitarist award presented by Epiphone, where John 5 of Rob Zombie’s band, Dan Donegan of Disturbed and Alexi Laiho of Children of Bodom are up against players from Iron Maiden, Ozzy Osbourne’s band and Avenged Sevenfold. Speaking of Ozzy, it could be a big sweep for the veteran rocker; his Scream album is up for Album of the Year, he’s nominated for Best Vocalist and his percussion man Tommy Clufetos is a possible winner in the Best Drummer category. Performers this year include a reunited Alice Cooper Group, Loaded featuring Duff McKagan, DevilDriver playing a tribute to Black Flag, Asking Alexandria with Sebastian Bach, Volbeat, Fozzy and many others. Mötley Crüe will be awarded the Ronnie James Dio Lifetime Achievement Award. Tickets are available through Ticketmaster, but you can also catch the whole shebang on VH1 Classic on May 28.

Ernie Ball Battle of the Bands

The Ernie Ball Battle of the Bands has been going on for 15 years now and numerous mainstream artists have won and gone on to better things; look what happened for Maroon 5 after James Valentine won the competition back in 1999. This year’s competition is now open and artists have until June 1 to submit their music at battleofthebands.com. The prize package is not too shabby: a $15,000 shopping spree at Guitar Center, a three-song EP produced by Matt Squire (Katy Perry, 3OH!3), a two-week slot on the 2012 Vans Warped Tour, a year of TuneCore service and gifts from Vans, Atticus, Music Man and main sponsor Ernie Ball.

A little bit of Appalachia comes to the Satellite on April 1 when Southeast Engine pulls into town for a show promoting their March 29 Misra Records release Canary. The album channels the mood of the Depression era of the 1930s, which of course makes it quite contemporary.