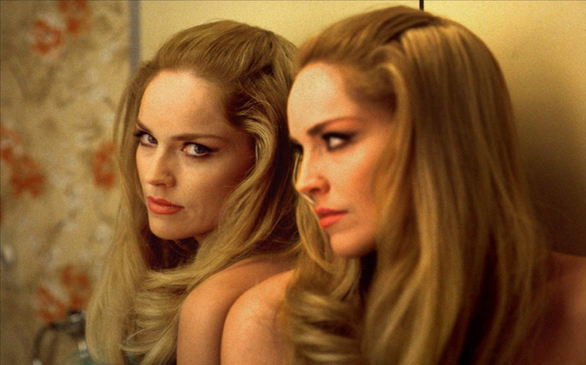 See Sharon Stone in person when Casino screens at the Aero March 18.

The moment a film makes history, however small that history may be, is like catching a glimpse of a shooting star. Yes, that is cliché, but it’s true. If you haven’t seen a shooting star – I’ve only witnessed one, brief but glorious, in my lifetime – then you should probably get outside more. My point is that there are certain moments in film that are so ridiculous or so comical or so endearing or so incredibly unforgettable that you can guarantee “Saturday Night Live” will formulate a semi-funny parody of it, and that the host (or hosts) of the Oscars will use it to get an easy laugh out of a tough audience.

I still remember when Billy Crystal hosted the Academy Awards in 1998. I won’t mention how old I was, but suffice it to say that I was, in fact, allowed to see Titanic (1997), the big winner of that year. Crystal had some prerecorded skit, much like what Anne Hathaway and James Franco did this year. But Crystal actually did it well, donning the jeweled necklace worn by a scantily clad Kate Winslet in the film.

That was a scene that no one could forget, especially the gossip mags that threw her under the bus because of her weight. But nearly 15 years later, what we remember is the necklace, her nude pose and Leo’s passionate eyes looking over the easel. Such memorable scenes have been lifted from hundreds of films that are inherent to our pop culture lexicon and introduced to us usually by “South Park.”

The art of being so memorable, however, is what every actor and actress tries to attain. The hard part in studying such trends of popularity is that what will grab the attention of one generation most likely won’t for the next. Marilyn Monroe was so popular in the ’40s and ’50s, why? Because she dared to show her upper thigh when all Ingrid Bergman was willing to do was show her natural talent. Robert De Niro and Al Pacino who, for all intents and purposes, are lumped into the same category of nitty-gritty, loud and crass acting, were favorites in the ’70s and ’80s, why? Because they had to react to the Vietnam War, which had all of America’s youth up in arms, literally and metaphorically. The popularity of acting talent is totally dependent upon the age in question, which really explains why Molly Ringwald had such a difficult time breaking her Brat Pack persona and maintaining her career after the ’80s were through.

If given the opportunity, watch the films of one actress you admire, or don’t admire for that matter, because I guarantee that you will find a correlation, a typecast role that plagued scripts through a relatively short period of time and which called for one particular actor alone.

This week, the Aero Theatre is helping you out with this assignment by screening several of Sharon Stone’s films. I know, she probably wasn’t your first choice, but you must remember, before she went crazy on a few red carpets, she was a powerful force in some of Hollywood’s favorite films.

She made her debut in a non-speaking role in Woody Allen’s Stardust Memories (1980), but she went on to work with acclaimed directors like Martin Scorsese, Albert Brooks and Paul Verhoeven. Stone became a bona fide star in Basic Instinct (1991) and, referring back to our memorable scenes conversation, whose mind wasn’t burned with the panty-revealing interrogation scene in that film.

If you haven’t seen it, it’s playing on Saturday, March 19, along with Sam Raimi’s The Quick and the Dead (1995). And be sure to catch the previous night as well. Like most of his films, Scorsese’s Casino (1995) was an instant classic. Set in Las Vegas, the film stars De Niro as a master sports bookie working for the mob. Stone is the hooker he falls in love with, a role that won her a Golden Globe and an Academy Award nomination. Additionally, Stone will be there in person that night, and it really doesn’t get much better than experiencing wacky Stone firsthand. The Sharon Stone trifecta is complete, and you will be able to check that one off your bucket list.