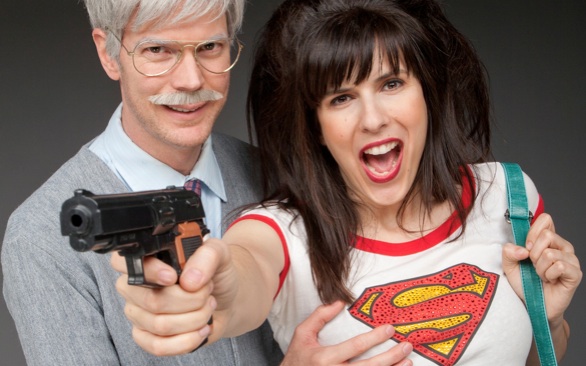 At the current main stage show, the ladies rule! It’s well known that the Groundlings is the breeding ground for actors to practice and perfect quirky characters that can later catapult them to fame (i.e., Julia Sweeney’s “Pat”). After attending several consecutive productions, a handful of breakout stars are worth noting.

Edi Patterson herself can claim a few. First, there’s the not-too-bright tart who is coupled up with a retired pervert in “Doing Shots.” We’ve seen them before, and the way they cavort in public is enough to make you gag, if you weren’t chuckling so hard. They are tongue fighting, touching inappropriately and just all around tasteless, making everyone in the immediate vicinity terribly uncomfortable. Then, Patterson throws on Urkel-style jeans and hilariously mumbles and trash talks her way through “That Perfick Fit,” in which she’s trying on baby shoes and proclaiming they’d be perfect … if she didn’t have to walk.

Charlotte Newhouse is another player with tremendous star power. As a recovering drug addict dependent on her life coach in “Coach Brenda,” she’s so odd that she makes you squirm along with her in fits of giggles. It’s physical comedy at its best.

Newcomers Laurel Coppock and Jillian Bell both make unforgettable first impressions. Coppock is bizarrely funny in “Piano Concerto” as she simulates an orgasm while playing, and Bell is ridiculously entertaining (with shades of reality TV) as Tommy Lee Jones’ son in “Father of Mine.”

And in keeping with the awkward female character theme that seems to carry throughout the night, Jill Matson-Sachoff has the audience on its knees in “Concert” as that lone attendee who rudely occupies your personal space and chomps weird foods loudly in your ear.

Comedy
Impractical Jokers aka The Tenderloins, Serving Comedy Up "Well Done": Live at The Grove of Anaheim (1/17)
3,731 views