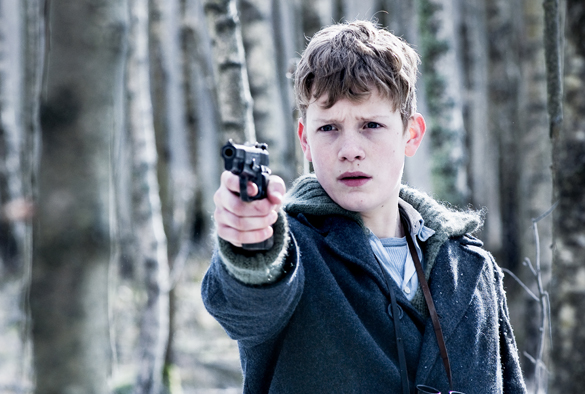 There has rarely, if ever, been a time in my life when seeking out a Dutch WWII film on a Friday night sounded appealing. It’s probably an even tougher sell to friends after dinner and drinks, especially if Bradley Cooper’s beautiful face is lighting up screens anywhere on Sunset. But in the awful talent lull between Oscar season and summer blockbusters, Winter in Wartime fills the gap well with the remarkable story of a young boy’s innocence lost at the hands of friends and family.

Wartime centers around Michiel (Martijn Lakemeier), a 14-year-old living in Nazi-occupied Holland who’s angry at how his father, the town’s mayor, glad-hands and laughs with Germans to keep the peace. He juxtaposes this cowardice with the courage of his friend’s older brother, Dirk (Mees Peijnenburg), who has decided to join a munitions raid, and his uncle whom he idolizes as a member of the local resistance. When Dirk is arrested, he leaves Michiel to care for Jack (Jamie Campbell Bower), an injured English pilot hiding in the woods. Now a self-appointed member of the Resistance, Michiel struggles with whom he can trust as he helps the pilot stay out of German hands.

Based on a novel of the same name, Wartime landed on the Oscar shortlist for Best Foreign film in 2008 and has already wowed audiences worldwide (It was chosen by critics as best film in its own country the same year.). Lakemeier turns in an impressive performance as the young Michiel. Letting his emotions show in his eyes and face rather than the volume of his voice, he carries the film and evolves into adulthood on screen while still enjoying the light moments that remind you he’s a kid.

Whether it’s Cooper taking wonder drugs or Johnny Depp voicing a lizard, “fun” films tend to push the likes of Winter in Wartime onto the back burner and eventually to the bottom of your Netflix queue. You’d be remiss to let this Dutch epic become a similar casualty.


Winter in Wartime releases in select theaters March 18.
Article posted on 3/18/2011
This article has been viewed 1470 times.