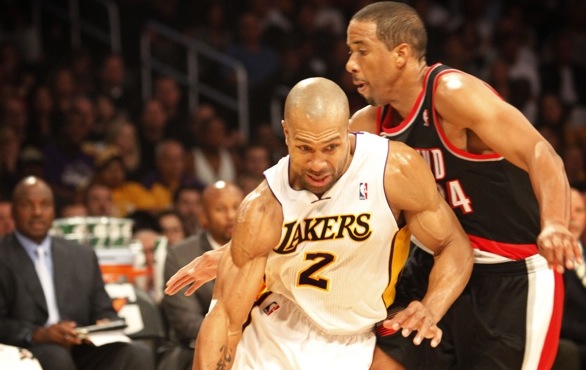 Derek Fisher of the Lakers and Andre Miller of the Trail Blazers compete for the ball.
(Credit: Barbara Davidson/Los Angeles Times/MCT)

On the night of their first game without suspended Andrew Bynum, the Los Angeles Lakers clinched their 22nd Pacific Division title with a win over the Portland Blazers March 20.

Their 84-80 victory did not come easily, however, since the Lakers had to rally behind Kobe Bryant’s 10 points in the fourth quarter. Bryant totaled 22 for the game, while adding four rebounds and three assists.

With 32 seconds remaining, Bryant drilled a complex shot from the right corner to calm Los Angeles in the closing moments of the game.

“That’s a difficult shot. Players that are the difference makers in this game are the kind of guys that make those kind of shots, and to have the ability to continue elevating or continue hanging and get the shot off against a good defense,” Lakers head coach Phil Jackson acknowledges.

Veteran Derek Fisher came up big in the last few minutes. With one steal and blocked shot, and a jumper in clutch situations, Fisher finished strong for L.A. He amassed eight points and three assists.

“I’m just always in the mindset of trying to help us win,” Fisher claims. “When it comes down the stretch, I’m comfortable just making the play. It’s not always going to be to make a shot, but even defensively, just being in the right spot at the right time you get a steal, which then allows you to go down and make a shot.”

In the absence of Bynum, who was suspended two games for a flagrant foul 2 Friday against the Timberwolves’ Michael Beasley, Lamar Odom started and recorded a double of 16 points and 11 rebounds. Pau Gasol added a double-double of 14 points and 13 boards, while the productive Ron Artest contributed 10 points and four assists.

“It was just our will; our will to make plays and battle,” Gasol says of clinching the division. “We’re playing great. It wasn’t very fluid out there, but we just got the job done, and that’s the most important thing.”

The Lakers return to the hardwood Tuesday, March 22, hosting the surging Phoenix Suns at 7:30 p.m.