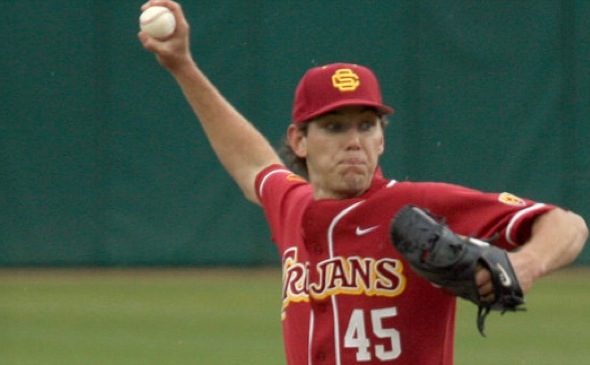 The No. 24-ranked UCLA Bruins did not play a single game due to rainy conditions in San Luis Obispo, but the USC Trojans did and won three of five contests.

For UCLA, what was supposed to be a three-game series against the Mustangs over the weekend turned out to be a series of altered time games. Now, both squads are hoping to compete in a double header Monday, March 21, at 1 p.m. and 4:30 p.m.

The Trojans, however, were local as they entertained two meetings against the visiting No. 19-ranked Louisville Cardinals and three versus the University of the Pacific Tigers.

Behind junior outfielder Alex Sherrod, USC beat Louisville, 4-3, in their opening game. Sherrod went 2-for-3 with a home run and three RBI. Pitcher Brandon Garcia tossed 5.1 innings of one-run ball for his first victory of the season.

With a sweep on the verge, the Trojans finished their job in a 9-4 pummeling during the second game. Junior infielder Ricky Oropesa went 3-for-4 with one RBI, while sophomore infielder Alex Glenn was 2-for-3 with a home run. Before collecting his first win of the year, junior pitcher Ben Mount threw five innings. Mount allowed one run on five hits, while walking two. Four additional pitchers were utilized thereafter to seal the triumph.

Against Pacific, USC took the first game of three, winning 8-2 with junior right-hander Andrew Triggs’ complete game. Triggs surrendered two runs on six hits, while striking out five in nine innings of work. The Tigers held a 2-0 lead, but it was all USC after the fourth, when they knotted the score. Infielders Joe De Pinto and Adam Landecker each had two RBI, but De Pinto collected three hits.

After coming home from the north route, the Bruins (8-6) begin Pac-10 play with a three-game schedule at USC’s Dedeaux Field March 25-27. Before meeting their crosstown rival, the Trojans face the UC Santa Barbara Gauchos Tuesday, March 22, in a nonconference affair at 3 p.m.