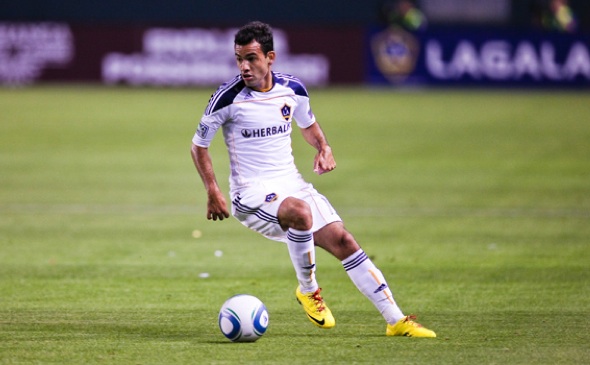 The Galaxy's Juninho is a more mature player this season.
(Credit: lagalaxy.com)

Brazilians are known for their unique flare of sparking plays in soccer, precisely when scoring.

The same can be stated about the Galaxy’s midfielder Juninho, who has scored twice in two games for Los Angeles. Two potent shots led to goals for the young star.

Los Angeles won its season opener on Tuesday after defeating the host Seattle Sounders FC by a score of 1-0, and then tied the New England Revolution, 1-1, at the Home Depot Center Sunday. Juninho’s goals highlighted each match for the Galaxy (1-0-1, 4 points).

Juninho’s goal against Seattle came from about 35 yards out of the left flank, while the score versus New England featured a 30-yard bullet from the right side. Both games experienced heavy showers.

“It is enjoyable for us. For everyone else it is difficult,” Galaxy captain Landon Donovan confesses. “I actually thought we did a good job considering the conditions and trying to play through it.”

“It was tougher tonight because obviously you had the wind, you had the rain. It was a constant heavy rain, not just a drizzle,” he says. “I would say the conditions were difficult, but it is the same for both teams. It is difficult to play beautiful football in that kind of weather.”

The Galaxy had two goals disallowed, one in the first half for a controversial fouled call inside the box and another in the second 45 minutes of play when Colombian striker Angel appeared to be offside.

Angel and Uruguayan midfielder Paolo Cardozo made their season and Galaxy debuts.

“Paolo is a young player,” Beckham remarks. “He is still learning the game, but he came on and he kept the ball well, passed the ball, penetrated well towards their goal. He is going to be a very good player.”

Los Angeles returns to the pitch Saturday, March 26, against Real Salt Lake in Utah at 6 p.m.