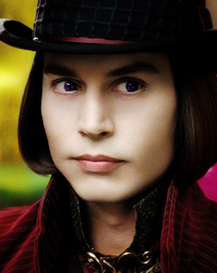 Johnny Depp and Tim Burton are one of a handful of cinematic dream teams. They’ve worked together on multiple films in the last 15 years, starting with Edward Scissorhands, in 1990, and culminating with their fifth collaboration, Corpse Bride, due in theaters later this year. While the actor and director have certain ways of hashing out the details of a story and character together – "We have this sort of process where we kind of speak in the abstract to each other and yet can somehow still understand each other," says Burton – Depp, who is well-known for having loads of input in shaping the characters he plays, says that it took a little encouragement from his 6-year-old daughter to develop the primary voice for his latest creation: the role of wacky candy maker Willy Wonka in Burton’s Charlie and the Chocolate Factory, currently in theaters.

"It’s funny, because when I’m by myself I would be mortified if I found myself reading out loud like the character. So what I did with Wonka was, I sort of tested it on [my daughter] Lily-Rose to see if it felt like I was going in the right direction," says Depp, adding that sometimes the voice of a character he’s working on doesn’t come out until he’s actually on set and ready to begin shooting. "You don’t really know the guy until you’ve been the guy … So what I did with Lily-Rose was that I was talking to her one day. Many times we play Barbies and she says, ‘Daddy don’t use that voice – talk regular.’ One particular time I started to do the Wonka voice on her, and she kind of lit up a little bit and gave me this sort of, ‘Where’s that coming from?’ And I thought, ‘OK, I think I’m on the right track here.’"

The "Wonka" voice, as Depp says, along with the costumes and mannerisms that match, are just a handful of elements that have been re-imagined for the current adaptation of Roald Dahl’s classic children’s book – which was originally published in 1964 and made into a movie in 1971 starring Gene Wilder as the infamous chocolatier.

In Burton’s version, Depp assumes the delicious role of Wonka, who, onscreen, is an extremely pasty man with a Price Valiant haircut (think neat bob with short bangs) and perfectly white teeth who prances around his huge factory sporting a knee-length velvet coat, top hat and squeaky purple latex gloves.

According to both Depp and Burton, many of Wonka’s attributes are based on kooky children’s show hosts from the 1960s and ’70s, such as Captain Kangaroo and Mr. Green Jeans.

"When I was a kid, watching [these guys], I remember thinking, even then, how odd it was the way that they spoke – that kind of bizarre, musical rhythm cadence to their speech patterns … So I took that and made that one of the main ingredients for Wonka and stretched it out a bit," says Depp.

Burton wholeheartedly agrees, saying, "In every city when you’re a child, there’s some weird children’s show host that has some weird name and usually has a funny haircut. You watch him as a child and then, as you get older and think back on him, you go, ‘That guy was fucking weird.’"

Developing Wonka’s mannerisms and appearance isn’t the first time that Burton and Depp have worked well creatively over the last 15 years. Their first effort together, Edward Scissorhands, proved to be a critical smash that, coincidentally, also helped establish Depp as a serious actor with a penchant for darker, more intriguing roles. Since then, they’ve collaborated successfully on Ed Wood (1994), Sleepy Hollow (1999) and Charlie. And let’s not forget about the tag team’s upcoming stop-motion animated film Corpse Bride, which is due in September.

With years and years of experience under their respective belts, the Depp-Burton duo have only positive things to say about each other. Depp says he has a "deep love and respect" for Burton because "over the years, he’s had to butt heads with the studio people … he fought long, hard battles and won to get me in [certain projects]."

The director fires back with equal praise for Depp, saying he’s probably so appealing to audiences "because he’s a character actor in a leading man’s body … He can do it all. He’s very versatile that way."

Charlie and the Chocolate Factory is currently in theaters.