By Megan A. Mathews 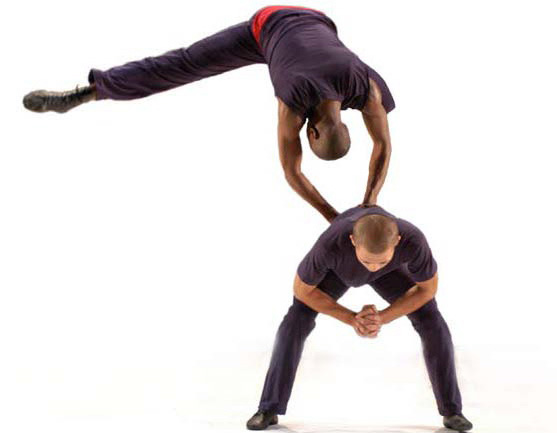 Twenty-eight years ago, Bill T. Jones and Arnie Zane (Jones’ life partner and artistic collaborator) founded a dance company that rapidly became world-renowned for establishing and then pushing the boundaries of postmodernism. For two nights at the Broad Stage, audiences were treated to a collection of early and lesser-performed works entitled “Between Us.” As the title implies, these dances explore and expose partnerships, their complexity and intimacy.

The three duets and one solo are very different from the company’s usual pageantry. There are no projections, no sets, no large group numbers. The stage is bare, the backdrop simply illuminated. The five male dancers wear clothes more evocative of rehearsal wear than costumes. Clearly, this evening is a return to nuts and bolts: solid technique, boundless creativity and genuine emotion.

The program’s overall tone is serious, with humor infused throughout. In “Duet,” wagging tongues and wiggling butts playfully taunt the audience. During scene changes, company members exhibit a nonchalance bordering on rudeness as they go about their business, chatting away. These and other lighthearted moments make the program accessible, as if to say, “Yes, we’re postmodern; but don’t worry, you’ll get it.”

Every duet in the program requires dancing in unison to an unconventional score with irregular beats – which, if you’ve ever tried it, is nearly impossible. “Duet X 2” has no score at all. It is in two parts with the lead dancing large sections of choreography twice, with one partner and then the other. In both pairings, the lead is extremely attentive while being mostly ignored. He follows his partners’ movements closely, but grows tired and at times can only mark the steps. Jones’ choreography is alternately intense, playful, aggressive and loving. The emotional journey is profound as the lead struggles to successfully connect with a partner, all the while repeating the same old patterns.

Nowadays, perhaps it’s not so unusual to see same-sex partnering, choreography that includes dialog or whole pieces done in silence. One might even say these staples of postmodernism have become conventions tending toward the pretentious, the absurd, the befuddling or the downright annoying. That’s not the case here. Bill T. Jones/Arnie Zane Dance Company’s “Between Us” is postmodernism done right, a program for the postmodernist and postmodern-curious, alike.