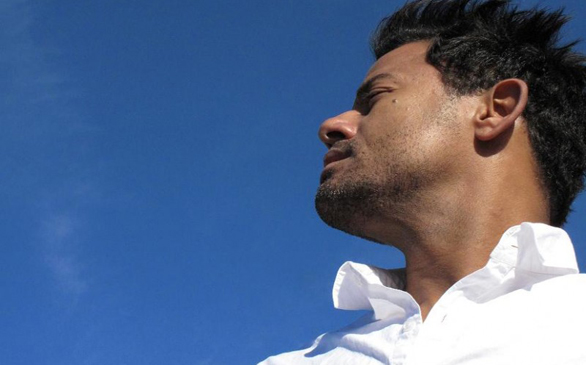 It is interesting that Aparicio calls this album Aerials; not only is that a play on words to his first name, but many songs here have such a different sound from what is normally heard on broadcast channels that it seems like the listener has a special aerial (antenna) attuned to some mysterious distant station. Not that Aparicio’s music is weird; to the contrary, he deals lyrically with relationships, a familiar subject, and this album is built around a tale of fractured love.

It’s the music and vocal delivery that puts this singer-songwriter in his own category; album centerpiece “Love Left Bleeding” buzzes like an urgent transmission from parts unknown and with U2-gone-cowboy music and Dylan-esque vocals; but wait a minute, by song’s end, the guitars and Aparicio’s inflection sound more like he’s David Bowie trying to hail Major Tom. “Love Left Bleeding” is the most rocking song here, and it also closes the album in a Latinized version (“Amor Sangrando”) with Spanish guitar strumming and added percussion; between the bookends the chameleonic Aparicio delves into the mid-tempo rocker “She Can Show Us,” again subtly reflecting Bowie love, a neat duet with Lisa Germano (“Sorry”) where she tells him to “take your apology and stick it!” and a bit of modern psych/folk called “Flowers.”

This is not Aparicio’s debut recording but since he is unknown, it might as well be and as such, it is a very strong introduction.

CD Reviews
An album about fame? Yawn. But Billie Eilish upends cliches on sumptuous 'Happier Than Ever'
1,114 views