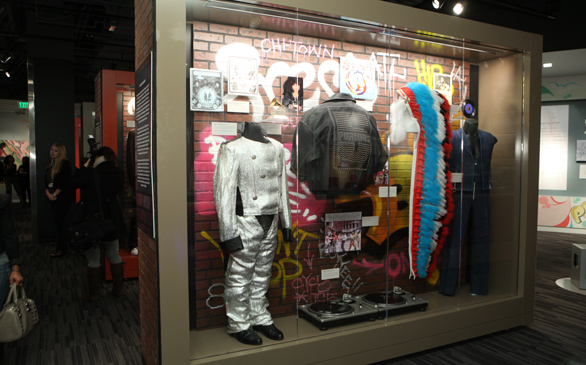 I have a confession to make: I’m not the greatest fan of hip-hop, nor an avid listener of it. For my whole life, I was rather ignorant of the music genre. Somewhat impossible, I know … but hip-hop never really struck me like other genres of music did. I was only intrigued by the genre when I went to hip-hop clubs to blow off steam from a bad week of whatever people my age deal with. So, of course, it was only natural for me to be indifferent. Turns out, there is so much that makes hip-hop so appealing, and why people like it so much. The Grammy Museum is hosting an exhibition highlighting four decades of hip-hop in the States. Here, you will learn almost everything there is about the history of hip-hop.

The Grammy Museum currently presents a variety of small exhibits on four of its floors. The second floor displays everything that has to do with hip-hop, from shoes of famous artists to rare artifacts from its notable past. And yes, the shoe racks covering an entire side of the wall are truly amazing. When you go up the escalators, you will immediately come face-to-face with boomboxes and colorful sneakers – the symbols of hip-hop (not quite sure why, but hip-hop and colorful sneakers have some real tight bond with each other) – from the private collection of Everlast. Right next to the infinite rows of shoes, there is a mini photo wall where you can get your picture taken. I probably shouldn’t have posed the way I did in my business casual attire, but I couldn’t help myself – I probably looked like an idiot because I swear some people were looking at me weird.

After your initial encounters, you should get ready to immerse yourself in some of the more interesting aspects of hip-hop. Those boomboxes and sneakers were merely an introduction to what you will see in the entirety of the exhibit. At the museum, you will be able to see rare photographs and original artifacts, such as handwritten song lyrics by Tupac Shakur, Grandmaster Flash turntables, LL Cool J TROOP suit and Kangol hat, Run-D.M.C. leather jacket and pants worn during “Walk This Way” performance with Aerosmith, DJ Jazzy Jeff Homebase Tour jacket and more.

What’s even better is that you can spend hours playing with the interactive mixing and listening stations that cover one side of the wall. My friend had to pull me away from this one because I somehow created a long line behind me. It was great to be able to have some hands-on fun at a museum where you normally just observe. And, of course, if you are genuinely interested in learning history, you can make your way over to the wall with the timeline of key dates and events that have occurred over the past 40 years that hip-hop has gained such widespread popularity.

Though I might never be a devoted hip-hop fan, this exhibition is an interesting experience. There is much to learn, and much to enjoy in such a small space. Once again, the Grammy Museum does not disappoint its visitors, offering juicy, original, rare artifacts and interesting details that make specific aspects of music so fascinating.