"The Vagina Monologues": My Journey From USC to Studio City 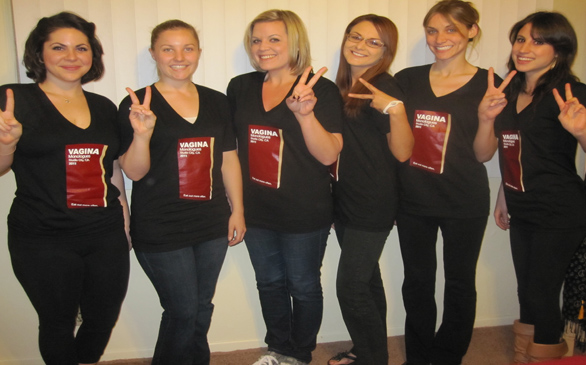 The cast of “The Vagina Monologues"
(Credit: Debra Graff)

If you’d asked me the meaning of V-Day when I started USC in 2005, I’d have said, “Does it have something to do with ‘The Vagina Monologues (TVM)?’” Question me today and I’ll fire back about how V-Day (The V stands for valentine, victory, vagina) has become such a passion that I can’t imagine life without it.

I learned that this international organization, founded by activist/playwright Eve Ensler, is dedicated to empowering survivors of abuse through awareness and education, and that over 250 productions of “TVM” (based on Ensler’s interviews with 200 women) occur annually to raise funds “until the violence stops.”

I first started working with V-Day during my junior year, as V-Day USC Coordinator/Producer. My dorm room turned into a vagina heaven … filled with flyers, programs, boas, pins, lollipops, postcards, DVDs, CDs and everything V-Day related you can imagine. My immediate reaction was sheer and utter panic. I called my mom afraid that I had taken on something way beyond my grasp. She told me to breathe. Thankfully I did, able to embrace this wonderful, life-altering experience full steam ahead.

I watched in awe as auditioning women poured their hearts and souls into the words, some even thrashing around on the floor in climax, while interpreting the monologue, “The Woman Who Loved to Make Vaginas Happy.” Magically, I was chosen to be part of the cast and for that, I’m eternally grateful.

In 2008, I attended V-Day’s 10th Anniversary Celebration in New Orleans. Six of us flew to NOLA to see “TVM” in the Superdome, an experience that literally took my breath away. During the show, Ensler asked anyone in the audience who was a survivor of sexual violence to stand. Two women from our cast stood and looked at each other with compassion, admiration and respect. Ensler then asked anyone who knew someone who was a survivor to stand. The rest of us stood. Her final request was that anyone who promised to take a stand, rise as well. The entire Superdome came to their feet, a truly unforgettable moment.

Later that year, I brought my mom to a Vagina Warrior Workshop with Ensler. We asked her if she’d like to host an event at USC. Suddenly, I was planning a “TVM”/V-Day fundraiser, including an Ensler talk with Dr. Denis Mukwege of the Congo, hosted by Rosario Dawson. Attended by over 1,000 people, we raised more than $17,000 for our beneficiary, A Window Between Worlds. Hands down, that evening was one of the best nights of my life.

After graduating from the USC School of Theatre, I felt like I’d be losing a part of myself without “TVM”/V-Day. Then I realized I didn’t have to stop my involvement because there are V-Day campaigns everywhere, in high schools, colleges and communities. And so, V-Day Studio City was born.

When we approach each production, we talk about why we’re still participating in V-Day and what that means to us. “TVM” is incredibly special and personal. It encourages support and camaraderie, rather than comparison and competition often occurring between girlfriends. The women I’ve met through V-Day are the most talented, selfless, motivated, inspiring and courageous people I know. They make me want to be and do my best.

“TVM” is not just a play. It’s a movement. It’s about hope. It’s about giving women a voice. It’s about sharing our enthusiasm and excitement with the world. We may not be able to end violence today, but we can do our part through V-Day.

I’m honored to bring “TVM”/V-Day from USC to my hometown of Studio City. This year’s unique presentation is closer to Ensler’s initial vision of simplicity, allowing audience members to focus on the words, recognizing the stories aren’t those of the actors, but of real women. For that purpose, I’ve recruited director Amy Rowell, who worked on one of the original productions in Chicago, where the women sat in chairs with index cards, wearing all black, and barefoot.

I’ve designated Peace Over Violence as our 2011 beneficiary for their highly regarded efforts to end domestic violence. I’m proud to be a Vagina Warrior, committed to carrying on this tradition for as long as possible. If we’ve touched just one person, then it’s all worth it.