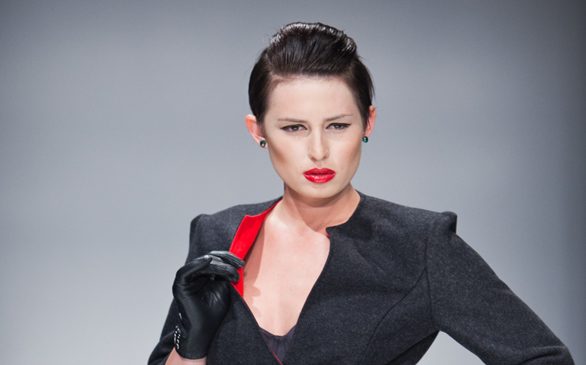 Fashion Week quietly stepped on the scene this March, and if the frenzy at Project Ethos is any indication, Los Angeles will soon become known for being more than a “jeans and flip-flops” town. The queue to get into the Avalon Saturday (March 12) night wrapped around Vine filled with L.A. fashionistas excited to get a glimpse of emerging designers’ latest lines. This night was especially notable as Season 7 “Project Runway” winner Seth Aaron Henderson debuted his first Ready to Wear collection.

Project Ethos has always been a favorite because of their innate ability to tie together the creative realm of music, art and fashion in one pretty package. It’s appealing to consumers as they get to mingle with designers and receive samples of products from sponsors, including Carlton Hair, Vitaminwater Zero (a new sugarless line from the healthy water) and Bumble and Bumble.

Kicking off the evening were rising musicians the Robotanists, a hometown band who have picked up some steam with their single “Wait a Minute Here” being played on KROQ and KCRW. Fresh off the release of their third album, Shapes and Variations, the Robotanists have a sound slightly reminiscent of Metric fitting right in with the indie vibe projects of Project Ethos.

Then came the fashion show, an eclectic scene with swimwear produced for the first time ever by Frederick’s of Hollywood, versatile knitwear from Cardiwrap by Kymaro (cardiwrapblog.com) and defiant velour jumpsuits from new line Age of Aquarius by Kristi Moon (twitter.com/kristimoon). Designer Melissa Velia’s (melissavelia.com) line blurred sexy secretary with a bit of vaudeville, while Ermelinda Manos’ ’50s-inspired frocks (ermelidam.com) were well received by the crowd.

Seth Aaron’s collection (setharondesigns.com) was undeniably a lesson in impeccable grooming. His attention to detail, from the red-lined pockets on high-neck trench coats to the houndstooth skirts paired with purple leather gloves, was electric. The clothes looked wearable and poised to be purchased by the buyers from Saks and your favorite indie boutique. I liked that though Seth Aaron’s clothes might set you back in the wallet, the pieces were classic, investment pieces. These are clothes that will not go out of style. Black, white and red … how can you go wrong?

Closing out the fashion festivities were DJs Yolanda Be Cool. Based out of Australia, the DJ duo teamed up with producer SCUP to release the smash hit “We No Speak Americano.” The single has topped international charts and receives regular airplay on KCRW.

The DJs kept the atmosphere thriving, as the Avalon turned into a dance party and dedicated art show featuring British iconoclast street artist D*face, who joined forces with Christina Aguilera on her last album Bionic. The street artist’s work was featured in the upstairs lounge Bardot. Curators from some of L.A.’s renowned art galleries, including ADC Contemporary Art, Art Pic Gallery and C4 Contemporary Art, gathered in the lounge as they studied his work and shared stories on where they had seen his work internationally, including in Spain.

With each year’s show getting bigger and better, Project Ethos is shaping up to be the “go-to event” for Fashion Week Los Angeles. As evidenced by the 2,100 in attendance, one thing’s for sure: It certainly won’t be going out of style anytime soon.