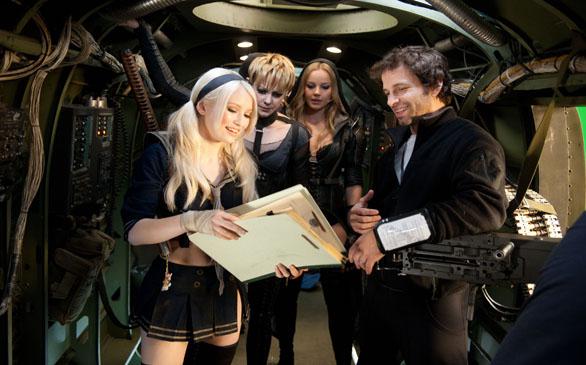 Director Zack Snyder is no stranger to epic films, putting together back-to-back successes with 300 and Watchmen. But with his latest fantasy masterpiece, Sucker Punch, Snyder slips the surly bonds of already-scripted graphic novel stories and creates a girl-power fantasy flick in which the only limitation is his imagination ... and the MPAA.

“The whole story would have been sex and violence,” Snyder says. “It would have been pretty overpowering. So, I thought it could be more of a cerebral journey. I told everyone, ‘If it’s not PG-13, this movie is going to be rough – really rough. I don’t know where they’ll show it.’”

His concern is understandable. Sucker Punch follows five women, each of whom has been institutionalized within the walls of a decrepit insane asylum, fighting against their pasts, their evil captors and each other. While their struggle is as rough as Snyder implies, their only means of escape is to imagine themselves in an alternate reality while they dance for paying customers. During these dances, the girls are not prisoners, but masters of their own destinies, and the action really takes off as Babydoll, Sweet Pea, Rocket and Amber battle steampunk zombies, dogfight fire-breathing dragons from the cockpits of World War II bombers and take on teams of 50-foot samurai warriors.

The fact that the movie is about five women who are locked in an asylum and forced to give private dances might initially seem demeaning. And the fact that the majority of the movie is set within the ’50s-era burlesque fantasy constructed by the controlling asylum director might seem a little condescending. And the fact that the alternate realities these women escape to involves them wearing next to nothing in five-inch heels and perfect makeup might seem somewhat sexist. But each actress in Sucker Punch wants to make it very clear that this movie is more than just a Comi-Con nerdgasm, and that there are completely legitimate and empowering elements to a film depicting five underdressed women blasting bad guys with machine guns.

Lead actress Emily Browning calls her role as Babydoll “extremely empowering,” even though she spends the film as a pigtailed schoolgirl.

“You see this sweet little girl,” Browning describes, “and her first line into the film is holding a knife to someone’s throat.”

Browning says she embraced “both sides: the sexiness and the strength. Females don’t need to be placed into these boxes of whether you’re sexy or you’re strong; you’re sensitive or you’re tough. Humans – men and women – are layered. I guess that’s one of the sucker punches of the film.”

The three supporting actresses of Sucker Punch, however, were quick to point out that working on the set of the film required more than heavy doses of caffeine. Despite the film’s cerebral toughness, the talent had to be put through some pretty rigorous physical training of their own, working out daily to obtain the kind of balance between sexuality and strength described by Browning.

Malone describes the first day of shooting: “When were down in the trenches, doing our tough walk, there were explosions and dirt was sticking to our lip gloss, but we had to make this look good.”

Like the characters they were portraying, Hudgens says filming was physically difficult, but also mentally challenging, describing it “like any negative situation – you just got to battle your way through.”

Sucker Punch is certainly Snyder’s most daring film, ditching the archetypically tough-guy action hero routine for a cast that’s decidedly more feminine, but also as equally intrepid. And don’t let the tiny leather outfits and dirt-encrusted lip gloss fool you – this is no Moulin Rouge! meets Ya-Ya Sisterhood. This is “The Powerpuff Girls” for grown-ups, and these girls are coming to kick some ass.

“They fight back against those stereotypes. In the end, the girls are empowered by their sexuality instead of exploited by it,” says Snyder. “It’s the most complicated thing I’ve ever been around in my life. And I directed Watchmen – that was fucking complicated.”

Interviews
James Bond producer: 007 ‘can be of any color’ but never a woman
677 views

Interviews
For Martin Scorsese, making ‘The Irishman’ was about ‘learning to die’
1,163 views