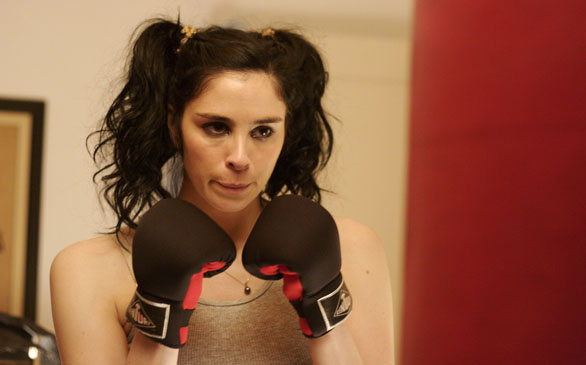 What do you remember about your last family meal? Was it stiff and awkward or loving with a flowing conversation about everyone’s success? The Meyerwitz family’s last dinner together involved screaming curse words, really awkward kisses, a pending lawsuit and a revelation or two. Throw in an apathetic father to a stressed ex-wife and their four grown yet immature children, and you get Peep World.

Director Barry W. Blaustein manages to weave together an insightful and incredibly comical 24 hours following the Meyerwitz siblings (Ben Schwartz, Michael C. Hall, Rainn Wilson and Sarah Silverman) on the day of their father’s 70th birthday. Not only is this family dysfunctional and unafraid to show it, but a recently successful novel written by the youngest Meyerwitz, Nathan (Schwartz), threatens to dismantle all of their secrets in one fell swoop.

Silverman plays Cheri, the artist/dancer/actor/screenwriter who is the most angered by her younger brother’s tell-all book “loosely” based on his family. Silverman shines as a caricature of an “artist” and provides many of the film’s chuckles and laughs. Jack (Hall) is the oldest, most responsible sibling and is constantly watching over Joel (Wilson), the black sheep. The dynamic between the two may seem familiar to some. Jack is Joel’s wallet and savior. But Jack isn’t as clean-cut as he seems.

The real meat of the story comes near the end: Why are all of these adults barely functional in today’s society? Why are they so screwed up? We aren’t given an exact answer. We are left to decide whose fault it is that these adults are acting like children, the father included. The real question is: Is there really one person to blame?

Amidst all of the existential questions you will ask yourself during the movie, you cannot possibly ignore the humor in Peep World. It’s a dry sort of wit mixed with over-the-top theatrics provided by a more-than-willing Silverman. Peep World plays out as a fleeting glance into a family’s life and, with great care from the director, leaves you wanting more.