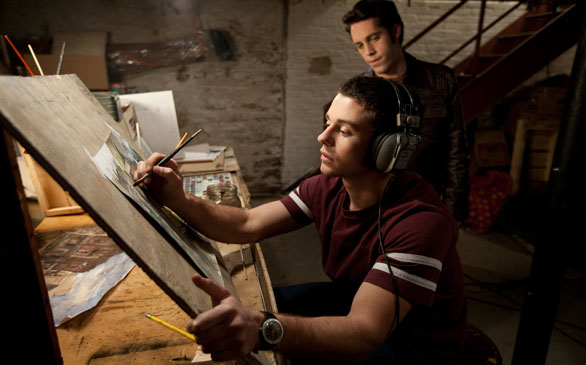 One would think that in the autumn of 1975, the scant rumor that the Rolling Stones (“Ron Wood’s first tour as guitarist!”) would be playing a small second run theater called the Lafayette in the provincial Bay Ridge neighborhood of Brooklyn would incite the electricity of drunken Mardi Gras revelry and the looting and destruction of a Lakers World Championship. Lots of flesh stripped clean, burning cars, Mayor Koch burned in effigy for the hell of it and a continual confetti of popcorn debris fluttering through a rain-soaked street in a good ol’ display of teenage rock ’n’ roll riot. That’s the idea anyhow.

Instead, during the crux of the film White Irish Drinkers, we get a handful of disinterested kids moaning and shuffling in hippie clusters as if they were auditioning for George Romero’s next zombie pic. At its root it may sound like a deal breaker, but it’s a small style point lost on me in what was a very competent and slightly clichéd coming-of-age tale, told in the style of Saturday Night Fever and, to a lesser degree, A Bronx Tale.

Urban Brooklyn in the ’70s is an easy location choice for just about any movie. Science fiction, period love piece, westerns – take your pick. Nothing is lost in the attitude, the wardrobe, the sets and the crippling ennui of the time. It all serves the bigger purpose of a drama told succinctly. This is where White Irish Drinkers succeeds, taking a familiar story and making you care about the lead, Brian (played with conflict and restraint by Nick Thurston). It’s not his pathos that draws you in, it’s the cast of assholes that you’re screaming for him to get free from.

His father Patrick (Stephen Lang) is as fearsome a character as I’ve seen on film in years, making the final scene of the movie so satisfying. His brother Danny (Geoff Wigdor) is taking up space in the neighborhood doing petty crimes for Jimmy Cheeks and trying to involve his brother in his own scripted world of small-town attitude and prideful xenophobia. “We Are White Irish Drinkers” is the common refrain. And his mother Margaret (Karen Allen) is caught between them all and depressingly ineffective in protecting herself or her boys. Throw in a cast of friends that range from buffoonish to dull, and you can’t help but find yourself rooting for Brian to make his way to the promised land of Carnegie Mellon at the end of a paintbrush while riding shotgun in the passenger seat of a VW van.