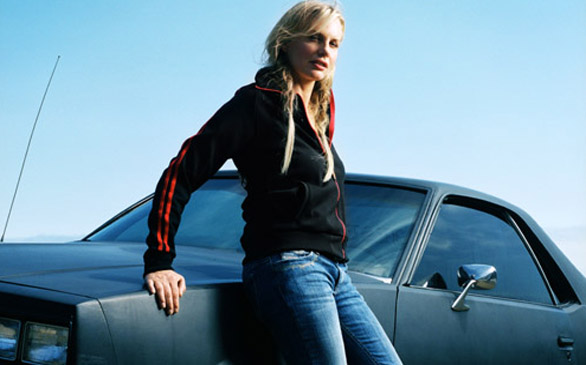 Daryl Hannah in front of her biodiesel El Camino

What is now considered a trend was once not so widely accepted. It goes by many names, the most common being “going green,” but what living a low-impact lifestyle really means is up to debate. Is just recycling enough? Do we have to drive a Prius? Where is the line that separates the regular, God-fearing individual who separates bottles, cans and paper from the visionary who does all she can to reduce her carbon footprint?

For actress-activist Daryl Hannah, being conscious of the world around her has influenced her decision to live in a solar home with graywater systems and an organic garden, to adapt biofuels as alternative energy and to use her influence with the public to spread the word on how anyone can do it, too.

“There just seem to be so many solutions to the crisis and challenges we face out there and available to us,” says Hannah about being an advocate for this cause. “So when I learn about them, I feel compelled to share the information.”

Making a keynote appearance at the Health Freedom Expo, which takes place March 25 through 27, Hannah has spent nearly as much time helping the Earth as she has on a film set. She became a household name in 1984 alongside Tom Hanks in Splash and has since starred in many memorable films like Wall Street and Kill Bill: Volumes 1 & 2.

She has found her calling on the big screen, but she has simultaneously been committed to the environment for over 20 years. As a greening consultant for events such as the Virgin Music Festival and a speaker at the UN Global Business Summit for the Environment and the National Biodiesel Conference, to name a few, Hannah is not so impressed with the growing ‘trend’ of companies who are ‘going green.’

“Every large corporation and every government entity has used the concept to greenwash their operations,” says Hannah, who is the founder of the Sustainable Biodiesel Alliance, a program that produces and harvests biofuels. “Going green has morphed into some pious, exclusionary, altruistic choice. The bottom line is that you can’t have environmentally sound practices without having socially conscious ones. The welfare of other species, humanitarian issues and environmental ones are one and the same. Green is coming to mean something that fails to consider the big picture.”

In order to provide solutions to the everyday problems the ordinary citizen would encounter with living environmentally friendly, Hannah has nurtured her own Web site called dhlovelife.com. Not only has she designed the site, she often films blog updates and contributes stories about anything related to the environment. The most interesting part about the site is that it really does provide alternatives to almost anything you can think of; you can buy a bamboo snowboard and the world’s only hemp guitar in “The Goods” section. Hannah says there are more reasons than the obvious to buy products that haven’t been made with nature as a casualty.

“If we all insisted on social and environmental responsibility from companies,” explains the actress, “perhaps we wouldn’t be buying goods that were made by slave trade or goods from companies that poison our water and soil. If we choose food grown without chemical pesticides, fungicides and chemical fertilizers, there wouldn’t be a market for those toxic products. So our everyday choices are important to our health, and they can have a cumulative effect and ultimately, create the possibility of a healthier, safer and happier world.”

The case for saving the planet has fallen by the wayside or, worse, into big company initiatives and marketing campaigns. Hannah continues to speak out for her passion, an admirable and compelling story from an actress who has reached the fame and success that has sent many others into a quiet life of enjoying wealth. As she so poignantly points out, “the usual trifecta: power, money and greed” are what prevent most people from living a low-impact lifestyle, even though it is to the benefit of us all.

“What we all want – unless you’re driven by power, money or greed – is a peaceful, abundant healthy planet and a healthy fulfilling life,” she says. “A bamboo snowboard won’t get us there, but every choice that we make or don’t make has an impact.”