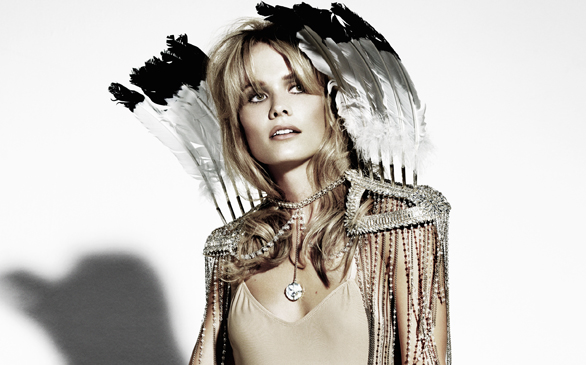 Within a sea of pearl-hued balloons, a statuesque siren resembling a young Nico carelessly bangs on invisible drums with lobster red drumsticks, demanding all eyes be on her. Even sudden flashes of light respond to her rich, candied vocals, which would make anyone happily surrender to cavities just for a taste. Heart-thumping electronica and mystical synths suddenly unite to create a dreamy dance melody. However, audiences won’t hear whispers of sweet nothings from this willowy chanteuse. The 25-year-old Danish singer, who goes by the enchanting name of Oh Land, croons about a not-so prince charming who can’t seem to be tied down.

“I fall out of love with you,” she cries, her voice as delicate and feather light as drops of rain, a surprising sound from the hottest blonde in music since a pant-less lady came to the scene. Sporting a red riding hood gown that purposely shows off her towering legs, the leading lady of the song “Sun of a Gun” instantly puts listeners under her spell with her outer worldly electro pop and lyrics of love lost. Before the new It-girl was spotted on every glossy magazine and bloggers raved over her runway-ready looks, Nanna Øland Fabricius had to first discover that the journey of a starlet is no fairy tale.

“I always felt like I lived in a forest,” comments Oh Land. “My mom would make all of our clothes, and we had so many animals. There was this creative energy everywhere.”

Oh Land, who grew up in picturesque Copenhagen in Denmark, was raised by a family of musicians, so it only made sense that she would follow in her parents’ footsteps, except she was more of a rebellious ballerina. For 10 years, she studied at the Royal Ballet School in Denmark until age 18, when a career-ending back injury shattered her dreams to become a dancer.

“That was a very tough moment for me,” she quietly remarks, her childlike giggles instantly fading away. “I was grieving, but also relieved. I’ve been looking for an answer that would explain what was wrong with my body. But, you cannot tell me to stop dancing because I’ll just find a new way to express myself.”

After years of soul searching, Oh Land rediscovered her roots and has never looked back.

During Oh Land’s dark period, she found herself writing music, an experiment she calls “a discovery of peace.” Like her opera singer mother and church organist father, she found a new love: songwriting. Not only did it help her cope with her sudden loss, it gave her a new purpose in life. By 2008, she released her self-produced album, Fauna, featuring her first 10 songs as an artist, a collection of more sinister trip-hop with angst-ridden lyrics where she exorcised her depression. After booking her own show at SXSW, Oh Land was discovered and signed to Epic in 2009.

“It has been a wonderful one and half years for me because a lot of stuff has happened,” she reveals. “I moved to Brooklyn and was meeting so many new people, but it made me feel vulnerable. That really inspired me to write all these songs. There are two sides to my new album. There’s that melancholic, emotional part, and there’s the optimistic side. It’s me.”

As Oh Land tours in support of her new self-titled album, she knows that she will have to make a sacrifice, one she believes will be worth it. While she has called Brooklyn home for several years now, Oh Land doesn’t mind leaving it behind for a while just to visit Los Angeles.

“What’s the first thing I want to do when I get to L.A.? Eat at In-N-Out Burger,” she states, laughing. “But seriously, I love L.A. I’ve spent a lot of time there, and I even wrote ‘Sun of a Gun’ while exploring the city. I performed in Los Angeles recently, and it was one of the most amazing experiences in my career. I can’t wait to visit again.”

Oh Land, who has spent the last year living in solitude in a studio working alongside legendary music producers Dan Carey and Dave McCraken, is anxious to finally release what she has been working on, even if it means saying goodbye to her home in tree-lined Williamsburg. Music has been Oh Land’s secret to newfound happiness, and now she’s ready to relinquish it in hopes that others will also find some peace in their lives. Simply put, Oh Land has no regrets in how her life continues to transform.

“It’s still painful to dedicate yourself to something for 10 years and lose it all in one day,” says Oh Land. “But, I’m happy that it turned out the way it did because what I do now is more honest to who I really am. I am making my own rules.”