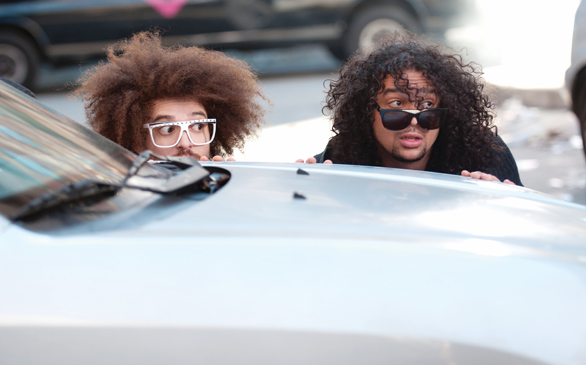 LMFAO get you shuffling along to "Party Rock Anthem."
(Credit: Stephanie Ma)

LMFAO Introduce the World to Shuffling

Electro hip-hop duo Redfoo and Sky Blu, also known as LMFAO, are currently in the studio putting the finishing touches on a summer release to be called Sorry for Party Rocking. But the guys have previewed some of the fun through a video for the album’s first single “Party Rock Anthem” featuring a new dance called “shuffling.” Viewable on Vevo, the clip is a takeoff of the zombie movie 28 Days Later where Redfoo and Sky Blu wake from a party-induced coma to find the world possessed to dance to “Party Rock Anthem.” Shuffling is said to be a dance so infectious that once the beat hits you won’t be able to help yourself. LMFAO’s 2009 debut, Party Rock, has sold 200,000 copies, and the duo has moved more than three million singles.

After the devastating earthquake and tsunami that shook the northern coast of Japan March 11, hard rock duo One-Eyed Doll is helping those in dire need through the power of music. The band has posted their latest single “Water Song” for download on a “name your own price” basis and will give 100 percent of the proceeds to the Japan Earthquake and Tsunami Relief Effort. One-Eyed Doll is singer/guitarist Kimberly Freeman and drummer Jason “Junior” Sewell, and the release date for “Water Song” as originally planned wasn’t until months from now. “

I didn’t write this song about the recent disaster, and it wasn’t meant to be released until my next solo album came out later this year,” says Freeman. “I just thought now would be a good time to release it with positive intentions and the possibility of raising some help and awareness for our Japanese fans.”

Are there a few one-of-a-kind heavy metal pieces that are missing from your collection? Is there an album you want to lay your hands on, or do you have a poster to sell? Then heavymetalbay.com may be just the thing for you. The Web site is a unique online marketplace for the heavy metal music-loving community and features items related in any way, shape or form to heavy metal; music in any configuration, videos, memorabilia, clothing, jewelry, posters, instruments and equipment are all items that can be listed. The site also has a section where bands can find gigs or promote their band or shows. A PayPal account is not necessary to purchase on the site and for a limited time, heavymetalbay.com is not charging to list an item for sale.

The Bouncing Souls Are In Complete Control

SideOneDummy owner and Complete Control Radio host Joe Sib has put together a live recording series to be released on SideOneDummy Records. Much like the Peel Sessions from the early years of punk rock, the Complete Control Sessions features live recordings from all the best bands in the scene. The series kicks off with the Bouncing Souls who recorded a six-song set for Sib, including a Misfits cover when they last came through Los Angeles. Matt Skiba of Alkaline Trio guests on the recording, which will be available digitally and in three different colored vinyl versions. Bouncing Souls Complete Control Sessions drops on April 12.

Psych prodigies Moon Duo are about to release a new album called Mazes and a couple of related goodies at the same time. Art-loving fans should check out the vinyl version of Mazes that comes in hand silk-screened packaging with a reversible poster. And for a limited time select outlets will offer a free-with-purchase bonus CD featuring six tracks from Mazes remixed by Sonic Boom of Spacemen 3, Purling Hiss and Psychic Ills amongst others. The release date for all configurations is March 29, and Moon Duo play live at the Echo April 12.

Scottish group Trashcan Sinatras are in the midst of celebrating their 20th anniversary, including an acoustic tour that stops at the Bootleg Theater March 31. The band is taking setlist requests at trashcansinatras.com, and if you happen to play trumpet, cornet or flugelhorn, you may be able to join the band onstage.