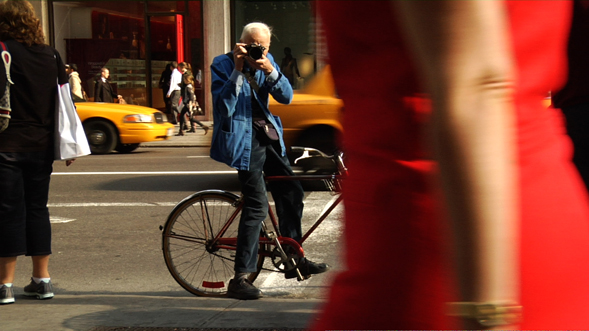 Bill Cunningham photographing in the street
(Credit: First Thought Films/Zeitgeist Film )
“See, a lot of people have taste, but they don’t have the daring to be creative,” says Bill Cunningham, New York Times Styles photographer. It is indeed those fearless souls with one-of-a-kind style who capture Cunningham’s eyes. In the documentary Bill Cunningham New York, he is determined to tell the world that it is the fashion itself and not the people, the tags or the price that really matters.

The documentary starts off with Cunningham on his way to work in his worn-out blue jacket and his ancient film camera around his neck. He cruises down every street in New York on his old bike looking for a “trend” – certain colors, lines, shapes – that tells its own story.

“I let the street speak to me,” says Cunningham. Each tale captured is placed in his column, “On the Street,” in The New York Times.

When the sun goes down, Cunningham’s day is yet to be over. He makes his way to an uptown soiree where he lingers in the midst of swarming photographers, personally greeting and snapping photos of the most prestigious New York socialites for his other column, “Evening Hours.” From fashion galas to charity events, Cunningham is always present and never fails to catch what everyone else happens to miss, which undoubtedly turns into a trend later on.

The way he dresses and lives (in a tiny studio full of cabinets) may not give away the fact that he is one of the most influential figures in the fashion scene. People often dismiss him for the way he looks, but the real “in-ers” of New York are dying to be photographed by him. Anna Wintour (Vogue), Lady Astor and Annette de la Renta are just a few who have maintained a solid relationship with Cunningham over the years, who have witnessed the ups and downs, the ins and outs of the fashion world by his side.

Yet, he never boasts of his status or connections. Even when downtown hipsters threaten to “break his camera” for taking their photos or when a PR newbie turns him down at a fashion show, he does nothing but smile. He treats everyone the same, both in real life and in his art. From socialites to transgenders, he has no bias against anyone – he truly believes that everyone is equal when it comes to beauty.