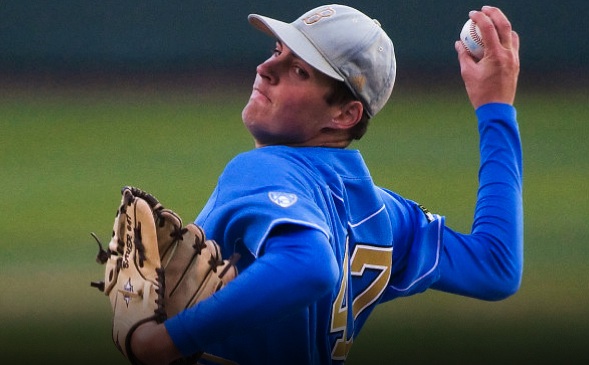 Trevor Bauer is UCLA’s strikeout leader in all of school history.
(Credit: uclabruins.com)

With two wins during a three-game series at USC, the No. 24-ranked UCLA Bruins had lifted spirits after their Pac-10 opening weekend.

The Bruins, who earlier in the week won one of two against Cal Poly San Luis Obispo, began with an 8-4 victory Friday. Junior right-handed pitcher Gerrit Cole (2-2) tossed 6.2 innings, surrendering four runs on eight hits but striking out seven Trojans.

Junior first baseman Dean Espy propelled the Bruin offense, having collected three hits, one run and an RBI. Five additional Bruin players had one hit, while junior catcher Steve Rodriguez produced three runs batted in with a double to left field at the top of the fourth inning.

Saturday’s game featured more of the same for the Bruins, who are now 11-8 overall and 2-1 in the conference. Junior right-hander Trevor Bauer tossed a complete game, a one-hit shutout in UCLA’s 4-0 victory. While recording his second career complete game, Bauer threw 120 pitches but in fine fashion. He recorded just the one hit with two walks, but collected 14 strikeouts. He carried a no-hitter into the eighth inning; he is now UCLA’s strikeout leader in all of school history.

UCLA scored three times atop of the fourth inning with three RBI singles, including one from Rodriguez. They then added their fourth run in the seventh.

Sophomore third baseman Cody Regis went two-for-three with an RBI, as eight other Bruins had one hit each to total 10 as a group.

Despite two wins in the first two games, the Trojans managed to avoid a sweep in the series finale with a 6-2 triumph. Junior All-American first baseman Ricky Oropesa had a three-for-five day with a home run and three RBI to lead USC (9-15, 1-2). Senior Logan Odom pitched seven solid innings, allowing one run and fanning seven.

UCLA faces the powerhouse Cal State Fullerton Titans Tuesday, March 29, on the road before hosting the Washington Huskies for three contests over the weekend, starting April 1. The Trojans, on the other hand, host UC Irvine Tuesday prior to traveling north to square off against Cal for a three-game showdown in Berkeley.