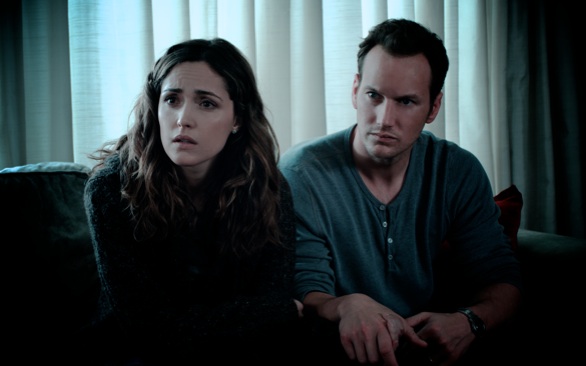 The thing about a horror movie is that it either gets to you, or it does not. Insidious is one of those movies that gets to you with its impressively creative plot, unpredictable scenes and scary moments.

Insidious pays tribute to Carnival of Souls, The Exorcist and Poltergeist. More importantly, the creators of Saw and Paranormal Activity team up for this new haunted horror flick.

The cast, led by an attractive Patrick Wilson and beautiful Rose Byrne, features Lin Shaye, Ty Simpkins and Barbara Hershey. Josh (Wilson) and his wife Renai (Byrne in perhaps her best performance thus far in her career) have moved into a new home with their two sons, and one of the boys seems to be possessed by a spirit.

After having suffered a minor accident in the attic, young Dalton (Simpkins) screams for help. Josh and Renai run to him, but everything appears to be fine. That is until Dalton does not wake up the next morning. Three months pass by and Dalton is in a severe coma, but that is the doctor’s opinion.

Several supernatural attacks produce shock and stress to Renai. Eventually, after witnessing terror and frightening images, Renai convinces the skeptical Josh to move out and find a new home. But that does not help much, because their previous home was not haunted. Dalton is, and this is determined from an apparent family friend, Elise (Shaye), who has experience with such supernatural events. Elise soon discovers that Dalton is in “The Further.”

Hoping to heal the broken family, Josh finally agrees to Elise’s methods of reconnecting the actual world with Dalton’s body and spirit. An attempt to bring back Dalton’s spirit goes well in the beginning, but it ultimately turns into a diabolical war between Josh, Renai, Elise and her crew against one particular evil soul trying to capture Dalton’s body.

What the audience soon learns is a shocker. Insidious’ unexpected sound effects add tension to its storytelling. James Wan’s directing and Leigh Whannell’s script captivate your attention. As Wan points out, Insidious is this generation’s Poltergeist.


Insidious releases in select theaters April 1.
Article posted on 3/29/2011
This article has been viewed 2515 times.