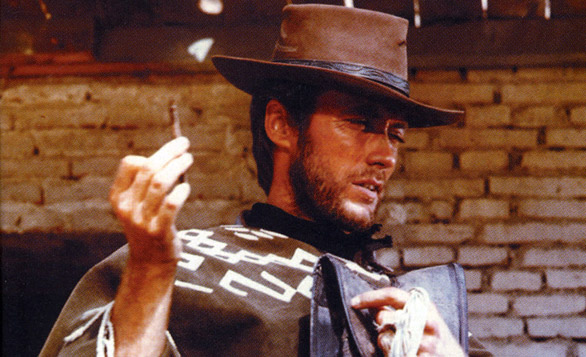 Clint Eastwood in A Fistful of Dollars
(Credit: MGM)

On March 19 I attended the first (and not intended to be the last) Spaghetti Western Festival, a celebration and a tribute to the spaghetti western film genre. Three classic films were shown: Gatling Gun starring Robert Woods, Dead Men Don’t Count starring Mark Damon and the film that arguably gave birth to the whole genre, Sergio Leone’s A Fistful of Dollars starring the iconic Clint Eastwood.

In addition to the films, there were Q&As with some of the actors following the films, and also in attendance was David Frangioni (author of the book Clint Eastwood Icon), who introduced Dollars. Capping off the event was a set by a garage rock band called the Insect Surfers who performed instrumental renditions of some of the great Ennio Morricone’s most classic spaghetti western scores.

The term “spaghetti western” was a term that described Italians making American westerns in Italy with American stars and a supporting cast of Italian actors. Ultimately, the whole genre really became a sub-genre of the whole “exploitation film” movement in the ’60s and ’70s. Exploitation films were unique because, while not really that good as films, they contained the type of nudity, sex and violence that you simply couldn’t see in normal films. Obviously that has all changed, and now Little Timmy can go down the street and see hardcore sex and brutal violence at the local multiplex. But there’s no question that the exploitation film movement, including spaghetti westerns, helped shape the content of cinema today. Which is why it’s important to never forget the history of cinema, and pay tribute as often as possible.

For more information, visit spaghettiwesternfestival.com.
Article posted on 3/29/2011
This article has been viewed 3250 times.