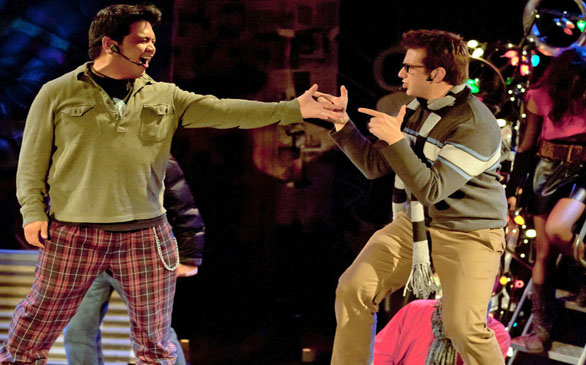 Known for its rock ballads and infamous for its bohemian propensity that everyone should “live your life in love,” “Rent” is a musical that resonates with audiences as much in 2011 as it did when it first opened in 1996. With music, lyrics and book by Jonathan Larson, “Rent” centers on a group of friends, living and working in New York City. Some of them are artists, but most of them are proponents of the ‘hippie’ lifestyle, and they are all dealing with the AIDS epidemic, which in the early ’90s was still a relatively new and hushed topic. Mimi and Roger are a couple struggling with the disease, as are Angel, a drag queen, and Tom Collins. Mark is busy trying to get over his ex Maureen who left him for Joanne.

As is the case with most stage productions that gain fame, “Rent” has been done in cities all over the world, and on stages as large as the Hollywood Bowl. Well, it is now back in Hollywood, but at a much smaller venue. With no more than 50 audience members facing the stage, this production of “Rent” is a bit more personal. As you can imagine, the stage is not concurrent with Broadway stage dimensions, but the set decorations make use of every square inch.

Like any good play, this production forces us to use our imagination a little; give them a little leeway and we are repaid with very good performances. Josie Yount is the standout as Maureen, and Benjamin Alicea as Angel manages to do some spectacular stunts in heels.

The passionate performances and direction and intimate setting make it worthwhile to see this rendition of the beloved musical.