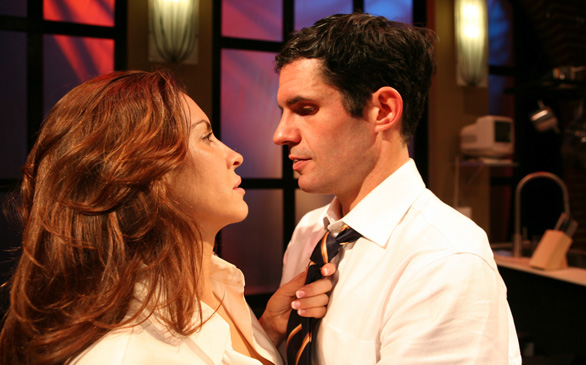 Neil LaBute sandblasted a career out of the gender wars like nobody’s business. In early films, like In the Company of Men and Your Friends & Neighbors, the politics of relationships reached a fever pitch, causing some critics to label the writer a misogynist. More recently, LaBute’s plays have been delving into broader questions of faith and humanity in plays like “The Break of Noon” – recently at the Geffen – and his latest to show in Los Angeles, “The Mercy Seat.”

“The Mercy Seat” uses the calamity of 9/11 to perversely showcase the inhumanity of man. While the rest of the world sentimentalizes tragedy, LaBute goes for the jugular, exposing the dark side of our nature. In the case of “The Mercy Seat,” Ben, played by a chillingly sniveling Johnny Clark, sees the World Trade Center disaster as an opportunity to abandon his family and begin a new life with his mistress. Meanwhile, the Other Woman, a searing Michelle Clunie, wrestles with his proposition, struggling to perceive it as romantic, rather than cowardly.

This is a thoroughly entertaining and thought-provoking work.

[Inside] the Ford is located at 2580 Cahuenga Blvd. East, Hollywood. For more information, visit fordtheatres.org.