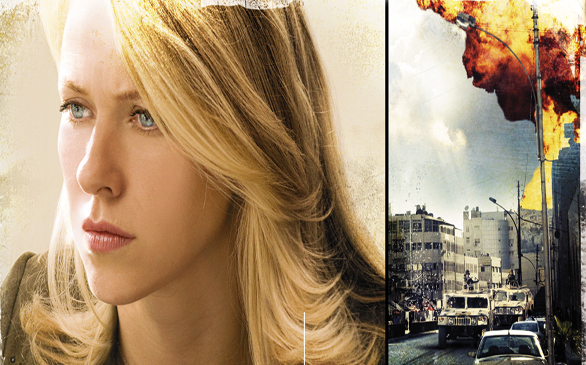 See It! Doug Liman (The Bourne Identity) tries his hand at real-life espionage with Fair Game, the story of CIA agent Valerie Plame (Naomi Watts) who was outed by the Bush Administration to silence her dissent going into the Iraq war. Sean Penn is her husband, a former ambassador who fought back against the ensuing smear campaign. It’s an intelligent, tense telling of a jaw-dropping true story.

Darren Aronofsky crafts another ambitious and original film with Black Swan. Oscar-winner Natalie Portman is an elite ballet dancer whose drive for perfection sends her to the brink of madness.

Easter Viewing: Nicholas Ray (Rebel Without a Cause) brought the life of Christ to the screen in the epic King of Kings, remastered on its 50th anniversary for Blu-ray.

Follow it up with a Charlton Heston-athon starting with the new Blu-ray release of The Ten Commandments, starring Heston in one of his most famous roles, as Moses. Then take a tour of the Holy Land with the four-part series Charlton Heston Presents the Bible.

Dirty Apes! Kick off the secular half of your Heston-athon with the Blu-ray release of the sci-fi classic Soylent Green. Then check out the DVD debuts of the gold mining thriller Mother Lode and the historical drama Antony and Cleopatra, both directed by Heston.

From the Vault: Another batch of forgotten gems from the MGM archives arrive from online retailers via DVD-on-demand. Highlights include the creepy thriller Return From the Ashes by the underrated J. Lee Thompson, John Forsythe investigating mob corruption in The Captive City and Billy Two Hats, a western with Gregory Peck and Desi Arnaz.

The Idiotbox: Find out what happened with Don Draper after the cliffhanger ending of season 3 as John Hamm and co. return for Mad Men: Season Four. Following a company of hotshot Manhattan ad execs, the series remains one of the best hours on television.

David Simon followed up “The Wire” with Treme: The Complete First Season, an ensemble drama set in post-Katrina New Orleans that touches on the lives of everyday people – musicians, restaurateurs and a college professor – whose lives were turned upside down by the tragedy. It’s chock full of local color and some great jazz.

Perhaps the most famous British TV show ever, Upstairs Downstairs: Series One comes to DVD in a new 40th Anniversary Edition, which features over six hours of new bonus features. The award-winning series contrasts the aristocratic Bellamy family with their servants during Edwardian England.

Stranger Than Fiction: The author of The Skeptical Environmentalist suggests a new approach to saving the planet in Cool It. Questioning conventional wisdom and the old throw-money-at-it approach to problem-solving, Bjørn Lomborg asks if there isn’t a better way.

The Human Experience travels the world shedding light on rarely seen human stories, from homeless New Yorkers to Ghanaian lepers. This touching film reminds us of our shared humanity.

Also Available: Who’s the Caboose? with Sarah Silverman, The Swimsuit Issue, One Week, Beneath the Dark, No One Knows About Persian Cats, Heaven Ain’t Hard to Find